The pricing change, which happened sometime this morning, makes the 7” 32GB edition of the Kindle Fire HD with Special Offers $229 instantly on Amazon’s website. The change in price could indicate that Amazon wants to put even more downward sales pressure on general-use tablets like Apple’s iPad Mini. 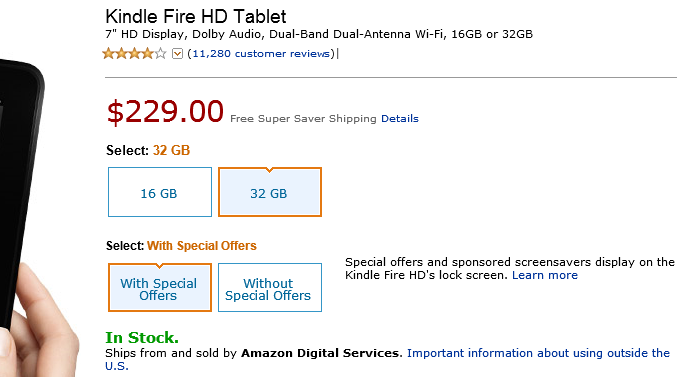 As of yet, most retailers haven’t matched the new pricing, but usually if a pricing change on the Kindle line is permanent, retailers follow suit and pass that same price on to their customers. Electronics retailer Best Buy, does currently list the 7” Kindle Fire HD with Special Offers at a price of $229, however usual options to get the tablet shipped are unavailable. In-store pick is still an option for those looking to get the device at the new price immediately.

It should be noted that Kindles with Special Offers are priced lower by Amazon as they ship with advertisements for products and media inside the operating system. Users can pay $15 to remove those should they see fit later on.

Amazon last cut prices in the Kindle line when it made available a special coupon code that adjusted the price of the 8.9” Kindle For HD with Special Offers in early February. Whereas today’s price 7” 32Gb Kindle Fire HD price cut makes a difference of only $20, that February cut resulted in a $30 savings for the W-Fi version. The LTE version of the 8.9” Kindle Fire HD dropped a full $50 from its regular price.

Amazon’s line of Kindle Fire tablets, unlike they’re e-ink screened predecessors –previous Kindles focused on e-book reading, are all about providing multiple forms of entertainment and services to users on a device that’s as affordable as possible. Amazon sells the device at, near or slightly below production costs according to Reuters, a move confirmed during parts company iSuppli’s teardown of the first generation Kindle Fire. Instead, Amazon relies on its online business to make up the difference on the back end.

Each device in the Kindle Fire line ships with a free month of Amazon’s video streaming service Amazon Prime. Also included in the $79 annual cost of Amazon Prime is free two-day shipping from Amazon’s online store. Additionally, Amazon Prime users are able to purchase and store music on Amazon Music service and stream those files to any computer or Android smartphone.