Lovers of bite-size gaming titles developed by small, independent development teams are about to get a new place to share their wares: Amazon.

Announced today via a post on its application distribution blog, Amazon seems to be taking the position that independent game developers just don’t have enough ways of getting their games in front of users, with the company’s Peter Heinrich saying,

“It’s hard to get noticed, though. If you’re an indie game developer, it’s usually a headache to get your game in front of people, both gamers and reviewers. Amazon recognizes this. As part of our commitment to independently developed games, Amazon is launching the Indie Games Store, a new category on Amazon in the Digital Video Games Store, designed specifically to address this problem.” 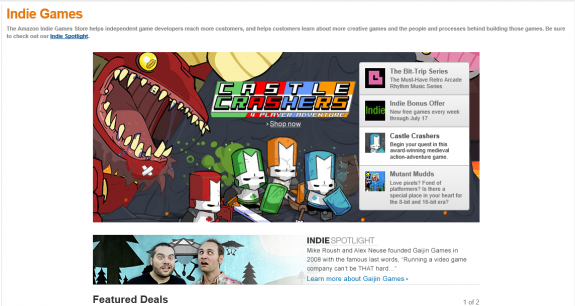 Through the Amazon Indie Games Store, user swill be able to download the latest Mac, PC, and web-based games from the company using the same credentials they already have for shopping at the company’s other stores like it’s physical goods area, and perhaps more importantly, it’s Amazon App Store.

The company says it plans to keep users interested in the titles of independent developers by constantly offering deals and editorial content including a series of question and answer sessions with developers it’s calling Indie Spotlight, special discounted bundles that’ll cost users $9.99 and include 5, 6 or even 10 games each and free games with the purchase of another from the store between now and July 17th.

The nature of this store and of the bundles could help Amazon compete with Steam and Humble Bundle, two well-known names in independent gaming.

Today’s move is just the latest for Amazon as it attempts to reinvent itself and adapt to whatever it feels users will be buying more of in the future. A few years ago it begin offering its own separate application store for users of Android that forces developers to submit their applications for certification, the thought being that users will want access to a safer, curated alternative to the Google Play Store.

Amazon already offers users downloadable PC titles as well as game trade-in deals and deep discounts on used games for popular consoles like the Xbox One and Playstation 4.

All of this is in addition to the Kindle Store that it uses to sell books. Together with its Amazon Prime video subscription service and movie and television stores, the company seems eager to ensure that no matter what entertainment users might prefer, it’ll be able to offer them a first-rate experience.