Users can engage AirPlay in iOS 6 and earlier using the typical method of double pressing the home button to open the control panel along the bottom of the screen. Swipe to the right and tap on the AirPlay icon to show the list of AirPlay devices on the network, like an Apple TV or a Mac running the right software (like Reflector, which turns a Mac into an AirPlay display).

In the upcoming iOS 7 users turn on AirPlay by swiping up from the bottom of the screen. The control panel slides up and the AirPlay option shows up in the middle of the control panel at the bottom. Tap it and see the same list.

AirPlay in Amazon Instant Video helps iPad owners who own an Apple TV because the service doesn’t yet run on Apple TV. Users can watch their videos on a big screen for their family or friends to enjoy. 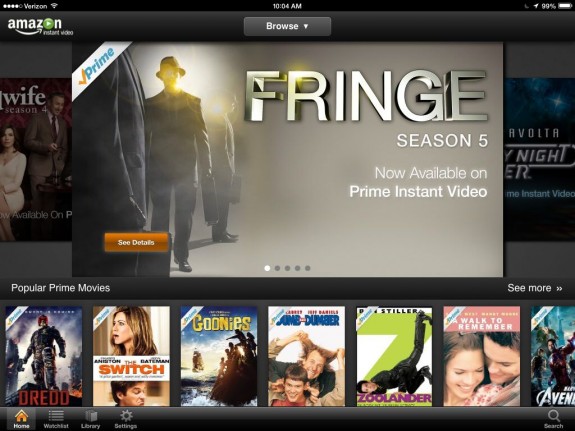 Amazon Instant Video began as a throw-in service for Amazon Prime customers and expanded when Amazon launched the Kindle Fire. In the time since it started, Amazon aggressively went after more content so that we now consider it on par with the quality of media available in Netflix. In a few cases certain TV shows  and movies only show up on Amazon Instant Video and not Netflix and vice versa, later seasons of Downton Abbey or the current season of Under the Dome.