All of the new Kindle Fire HD tablets, from the $199 7-inch model up to the $499 Kindle Fire HD with 4G LTE will ship with Amazon Special Offers installed and running.

This service is normally offered as a low-cost entry for the Kindle, which comes with a $30 discount, but the new Kindle Fire HD tablets won’t offer a no ads version at purchase.

This means Kindle Fire HD users will be in for ads on the lock screen and in the lower left of the home screen. The ads will disappear when the screen turns off, but users will see them when they unlock the device or use the tablet. Amazon states that these ads, “don’t interrupt use of the device.” 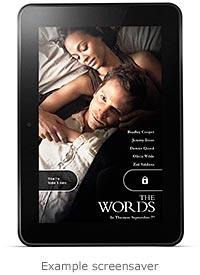 Amazon says these ads will be for movies, music and books as well as deals on Amazon items and consumer electronics such as a discount on a HDTV.

The image to the right shows a sample special offer ad on the lockscreen of the Kindle Fire.

This fits in with Amazon CEO Jeff Bezo’s statements during the Kindle Fire HD launch that Amazon isn’t about selling gadgets and making money on the initial purchase, but on selling a service and making money as consumers use the device.

While users can’t purchase the Kindle Fire HD without ads, Amazon confirms to Engadget that there will be an option to turn the Kindle Fire HD ads off for a fee. Current Kindle owners can turn off Special offers for $30, but it’s not clear if that price will stay the same on the new Kindle Fire HD tablets.

Users who are willing to root the Kindle Fire HD tablet will likely be able to remove the ads without paying. There is already a hack to remove Special Offers on the old Kindle eReaders, and with Android on board we assume it won’t take long for someone to figure out how to remove the ads.

Update: You can’t pay to opt out.