As what we can only suspect to be an early Valentine’s Day sale for Amazon, the company has discounted its Kindle Fire HDX lineup, as well as the Kindle Fire HD 8.9. Consumers can get the 7-inch 16GB Kindle Fire HDX for just $199, which is $30 off from the normal $229 price tag.

Obviously, you’ll have to tack on a few extra dollars to the price tag if you want your Kindle Fire without the “special offers,” but it’ll still be cheaper than the regular price of any of the tablets. 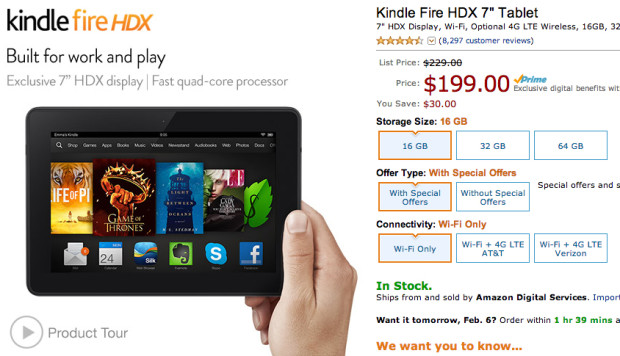 Amazon has never been shy about discounting its hardware products, dropping the price of its Kindle Fire tablets by $50 for Cyber Monday back in December, as well as few other models about a week later. Most recently, Amazon discounted the HDX by $30, but this new deal is much more enticing.

You can usually take advantage of Kindle hardware sales throughout the year, so there’s almost no reason to not wait for a good deal on a Kindle e-reader or Kindle Fire tablet, so if you’re wanting a Kindle Fire HD, saving $80 is about the best deal you can find right now, so don’t hesitate.