I love my new Kindle Fire and it seems I’m not alone with between 3 and 4 million Kindle Fires shipped already, according to Digitimes sources.

The new Android based tablet from Amazon is expected to ship as many as 5 million Kindle Fire tablets through the holiday buying season and into January.

The OEM that makes the Fire, Quanta, would not confirm the numbers but sources said Amazon increased their orders and the maker of the Fire’s touch display, Wintek, will send around 3M to 3.5M touch panels to the manufacturer by January. [Read about Amazon ramping up production in wake of demand]

We already saw that Best Buy sold more Fire tablets than iPads during the initial days of the holiday buying spree over the Thanksgiving weekend. While I doubt Apple will be trembling too much, the success of the Fire shows that a tablet can compete with Apple if it is priced them right. 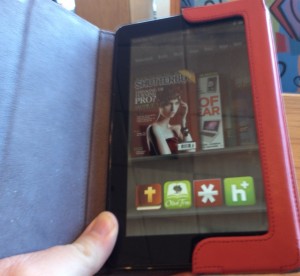 The Fire can’t do all that the iPad can do and has a smaller display. But at only $199 it’s an attractive alternative to those who have simple needs.

I’m already doing most of my reading on my Fire. I previously used my iPad as my primary reading tablet, but I love the 7″ form factor and with this great M-Edge case it feels like reading a high quality leather-bound book. I also enjoy watching video on the device despite the smaller screen.

Amazon clearly has a winner with the Kindle Fire and expect the Amazon App store have many more quality apps as the Fire keeps flying off the shelves.

This will only make the tablet space better with more quality options like the iPad, the Fire and the upcoming release of the ASUS Transformer Prime, the update to what many people think, myself included, was the previous best 10″ Android tablet available.

UPDATE: Another analyst also thinks Amazon will ship nearly four million Kindle Fires this year. iSupply released numbers suggesting 3.9M tablets will ship be year’s end. They also say that the tablet will claim some market share from Apple and Samsung, the two most popular tablets until now. Apple’s percentage will drop 4.1 percent to 65.6 and Samsung’s will fall from over 7 percent to only 4.8 points.