Rumors of smaller, lower priced Windows tablets have just been confirmed by way of an Amazon webpage detailing an Acer-branded tablet with an 8-inch screen and low price tag of $379.

According to an Amazon.com page that had been located here (now taken down) for the Acer W3 -810, the tablet would feature Intel HD graphics, Wi-Fi, 32GB of onboard storage and 2GB of RAM. That aforementioned 8.1 inch touchscreen would have a resolution of 1280×800 pixels. Imaging would include a 2 megapixel rear-facing camera. Users would also have access to just one USB 2.0 port on the device.

These specifications also point to an estimated battery life of 8 hours and an overall weight of 1.1 pounds. According to Amazon, the device will cost users $379.99. 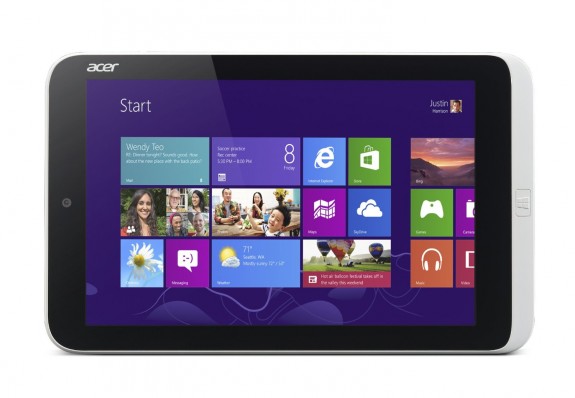 Though this leak would confirm recent reports of cheaper tablets coming to Windows 8 users, it could be out of date, as it also mentions that the Acer W3-810 will ship with an Intel A4 1.5 GHz processor with 1MB of cache. As far as we could find there are no current Intel products with that name, however Apple did manufacture such a chip for use in its recent hardware. Apple’s A4 only shipped with 512 KB of cache. This could be a mistaken field by the Amazon employee who entered the data.

There’s also the problem of the expected launch date for the device. Amazon bills the device as having been made available for users to purchase right away. While Acer did announce a new lineup of tablets recently, there were no mentions of the Acer W3-810. Instead, their recent announcement focused on the upcoming Acer Aspire R7, with its unique “Ezel” hinge that allows it to have a tablet mode.

Photos of the Acer W3-810 first surfaced last month. In those photos the W3-810 was shown to be mated to a keyboard dock of the same color.

Recent moves by Microsoft have indicated that the company is preparing to allow its partners to produce smaller Windows 8 based devices. The company is said to be lowering the costs its partners pay for Windows 8 in an effort to give them more space for selling lower cost Windows devices to compete against the iPad mini and Nexus 7. The iPad mini starts at $329 while the Nexus 7 sells for $249.