Amazon Prime Air vs Santa: This Letter Says it All

Things are getting out of hand when children are sending letters to Santa complete with full, huge product listing links to sites like Amazon, but it’s kind of awesome. If you’ve seen one before, they aren’t short. This holiday season a ‘Dear Santa’ letter has surfaced over on Twitter that has 2013 written all over it.

It may not be the 80’s and 90’s anymore where kids were happy with a magnifying glass and a new skateboard, like myself, but there’s still plenty of holiday spirit for Jolly Old Saint Nicholas. Even if Amazon Prime Air wants to replace Santa and his Reindeer, kids still know what they want. The entire Santa letter was posted over at The Inclusive, with tons of long website listings for online sites like Amazon, eBay, ToysRUS, and more. 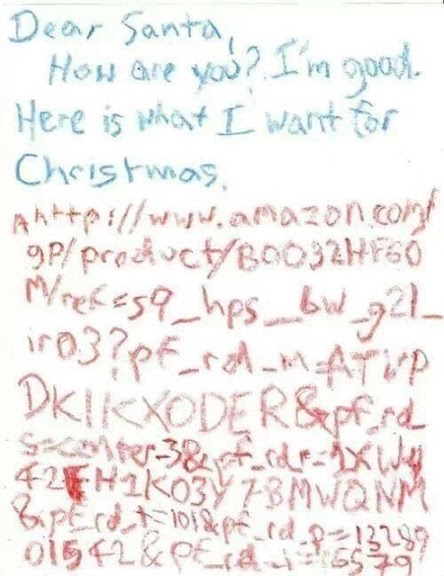 For those curious as to what the product listing above actually is for, you’ll be happy to know this young child wanted a $20 RC car from Amazon. It may have been easier to just update his Amazon Wishlist and send that to his parents, but oh well because this is the cutest thing we’ve seen this holiday season.

Twitter user @Gequeoman shared the image earlier this week, mentioning the entire letter was written in crayon, and we couldn’t help but look for more information. While we’re hearing it wasn’t actually written by a child, it makes sense given the world we live in these days. Amazon wishlists, Black Friday deals, holiday shopping and more, online is now, and the future.

In the end however, you have to give the little guy some credit, even if it wasn’t a little guy after all. There’s plenty of URL shortners out there in this day and age, not to mention he could have just said, “I want a Whale RC Car from Amazon” and been just fine. You have to give it to him, as that’s a lot of effort put into a ‘Dear Santa’ letter. One that probably won’t be topped for some time. He must REALLY want that RC car.