Android users who download their applications through Amazon’s App Store can look forward to a refreshed shopping experience the next time they open the application.

Amazon hasn’t formally announced the revamped interface, however an application update containing user interface changes for the Amazon Android Appstore began appearing on the company’s website over the weekend. Although there doesn’t seem to be any huge interface additions, the app is a bit more responsive than its predecessor. The updated UI also has many of the same design elements as the Android App Store that’s available to users who purchase Amazon’s latest Kindle Fire tablets.

Everything else about the application seems to have gone unchanged. Using the application, Android users can purchase apps from Amazon’s App Store with payment methods associated with their Amazon account,  like Amazon Credit and credit cards they’ve made purchases with in the past. 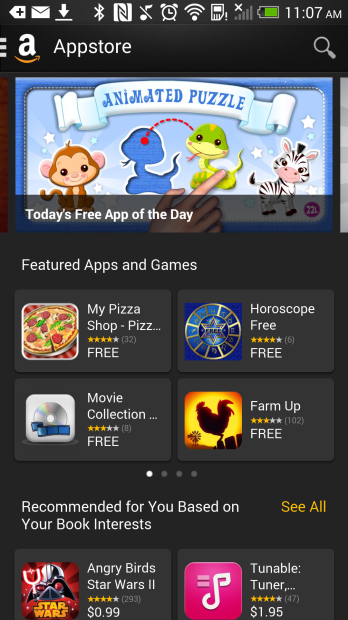 Unfortunately, Amazon didn’t take this opportunity to drop the requirement for all users to have a credit card associated with their Amazon account before they can download even free applications. That’s key, as Amazon offers Android users a different free application every day.

Unlike Google’s own Google Play App Store, Amazon actually curates the apps that are available in its Android app store. As such, the company checks for malware and other potentially harmful things before allowing developers to offer their applications to Amazon App Store users on Kindle tablets and any Android smartphone with the Amazon App Store installed. All told, the system isn’t too far from the way Apple and Microsoft handle app submissions on their platforms.

By comparison, Google itself doesn’t necessarily perform these steps in the same order. Any application can be added to the Google Play Store, however Google pulls applications if they are found to be in violation of the Store’s Terms of Services or contain malware that is harmful to the Android ecosystem.

Users can’t download the Amazon App Store through Google Play. Instead, they’ll need to head to Amazon’s website to initially download the app. Once installed, the application will update itself over time.