After having discontinued its large 9.7-inch Kindle DX e-reader in October 2012, Amazon is now bringing back the hardware that’s unchanged from its release since 2009. It’s unclear why Amazon is quietly re-introducing the tablet in 2013; the company so far has not issued a statement or press release, only to allow the Kindle DX to speak for itself with its own product page on Amazon‘s online shopping site.

Since last year, the price has dropped roughly $80 and the 2013 re-release of the same Kindle DX e-reader now retials for $299. That price includes free global 3G access to download your favorite digital books and textbooks from the Kindle Store. 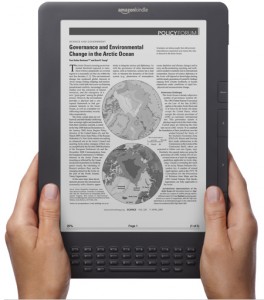 When Amazon had retired the e-ink slate late last year, it was believed that large dedicated e-readers are having a more difficult time competing against colorful tablets that could enhance the textbook experience. When Amazon had conceived the DX several years ago, the slate was meant to provide an alternative to print textbook, but since then color tablets like those running Google’s Android operating system and Apple’s iPad have offered more to students, such as videos, visual animations, color display, and the ability to collaborate in an all-in-one mobile computing package.

Still, there remains advantages to the E-Ink display used by the Kindle DX, including reduced eye fatigue when used over a long period, readability under direct sunlight, lower cost of entry, and much longer battery life on a single charge.

Though Amazon had previously retired the Kindle DX, it still continues to release E-Ink readers with a more compact 6-inch display. The Kindle Paperwhite model is even more affordable and comes with its own backlight so it could be used in the dark.

Amazon also has dedicated tablets as well that could also do double duty as an e-reader, like those from the company’s Kindle Fire range.