To celebrate the launch of the PS4 (as well as giving its own products a bit of a promotional boost), Amazon is selling a PS4 bundle that includes a 7-inch Kindle Fire HDX tablet for $599. This means that you’ll essentially get the Kindle Fire HDX for just $200, which is $30 off the normal price.

It’s certainly not a huge discount, but if you’ve been thinking about getting a PS4 and a Kindle Fire HDX, you might as well kill two birds with one stone and get the upcoming bundle. Sadly, it’s currently shown “unavailable” due to the PS4 itself being sold out, but it will hopefully be brought back in the near future. The bundle initially went on sale at midnight earlier this morning.

The pairing of the a PS4 and a Kindle Fire HDX might seem a bit odd, but Amazon assures us that the two work together nicely, saying that “while the PS4 heralds in the next generation of consoles, Kindle Fire HDX does the same for tablets with improved visuals, a faster processor, and the revolutionary ‘Mayday’ button…Partner these together with the interactive Second Screen feature for a completely immersive entertainment experience.” 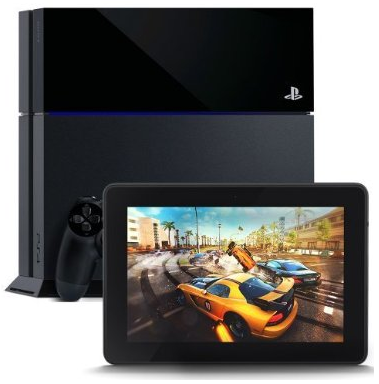 If you’re not familiar with the PS4’s second screen capabilities, it’s exactly what it sounds like; you’ll be able to fling videos to your TV, send and receive PSN messages, manage your game invites and even purchase games using the PlayStation app that Sony released a few days ago.

Of course, Amazon also has regular bundles of the PS4, as well as the Launch Edition, but those seem to all be sold out as well, since the listing says “unavailable.” However, if you want to save $30 on a Kindle Fire HDX, there’s no harm in waiting for that bundle to come back, although $599 is a hard pill to swallow, especially considering how you can simply just get the console itself for $399.

The PS4 officially launched today, marking the beginning of the next-gen console era. The Xbox One will be launching next week, and that’s when the war will officially begin. This holiday season should be a good one, and we’ll see who becomes the ultimate victor after the Christmas trees and lights have been taken down.