Square and PayPal both have mobile credit card readers that storefronts can use to ring up payments, but Amazon is getting in on the action with a card reader of their own for iPhone.

The giant online retailer has launched what it’s calling Local Register, and it’s a credit card reader that looks to take Square and PayPal head on in the small business market.

The card reader works similarly to Square’s and PayPal’s own card readers, where you plug the device into the headphone jack of a smartphone or tablet and scan credit cards to accept payments.

One of the bigger downsides where’ hearing about, though, is the setup process. Reviews for the service are already starting to trickle in and many users are saying that while it’s a great idea for Amazon to have its own card reader and payment system, the sign-up process is a bit confusing, as some users are saying that they have to create a whole new Amazon account and cannot use their current Amazon account. 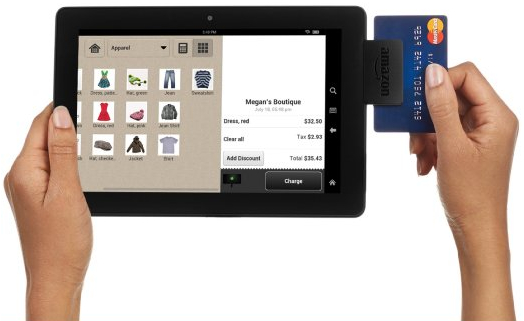 Users are also complaining about the lack of device support, with popular devices like the Nexus 5 and HTC One out of the question. Of course, Amazon’s Local Register is still very new, so it could be likely that the company will expand support for the card reader to more devices as time goes on, seeing as how not everyone uses an iPhone, iPad, Samsung Galaxy S, or Fire device.

Another downside that users seem frustrated about is that depositing money into a linked bank account will only happen the next business day, instead of the same business day, even if it’s before the cutoff time. This is where PayPal Here has a bit of an advantage, but the 1.75% introductory transaction fee that users can’t take advantage of is pretty enticing, and it’s good until the end of next year. Users want to pay as little as possible with any kind of fees, so we wouldn’t be surprised if Amazon took away some customers from Square and PayPal.

However, it’s possible that Amazon won’t profit a whole lot off of its Local Register, at least not until the introductory fee rate goes up to 2.5%, but the company has been known to sell products at cost just to undercut competitors and gain a lead in the market share, so we wouldn’t be too surprised if it was doing that here.