The Amazon Tap Portable Speaker makes Amazon’s Alexa voice service technology mobile and cheaper in one package. We reviewed the original Amazon Echo giving it rave reviews. How does the smaller and more portable version compare?

Amazon released two updated versions of their Echo Alexa-enabled devices, the Amazon Tap Portable Speaker for mobile use and the Amazon Echo Dot to hook up to a stereo or speaker, turning any stereo or speaker system into an Echo device. I liked the original Echo so much I bought the portable Amazon Tap for two reasons: a lower price and the Tap’s greater mobility. I can take it with me easily, something I’ve longed to do with my Echo. 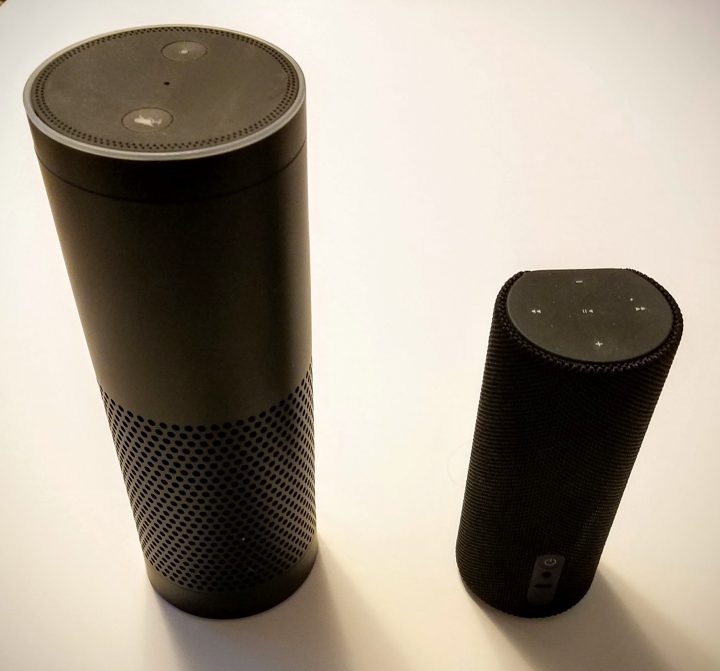 People who don’t care about portability should check out the Dot which costs $90 less than the original $179.99 Echo.

The original Amazon Echo, the new Amazon Tap and Amazon Echo Dot respond to pre-programmed commands or inquiries thanks to the Amazon Alexa Voice Service. Command Alexa to set an alarm or give you a quick weather update. Tell Alexa to play some music, an Audible audiobook or play a podcast from Tune In Radio. Alexa responds to the commands and reads info from predetermined web sites, plays media from multiple sources or does the actions the user commands it to do.

Amazon is aggressively adding new functions, also called skills, to the Alexa Voice Service. Users can connect to their Google Calendar to create appointments, get an update on what their day looks like or add a task to their To Do list. Alexa will also interact with automated home systems like the Nest Thermostat, Philips Hue Lights and more. It even orders pizza from Dominos using the user’s favorite pizza that he or she has set up in the online Dominos site or in the app.

Thanks to a connection to IFTTT users can also interact with almost any service they’ve connected to IFTTT. For example, install IFTTT on iPhone and then trigger Find My Phone from the Amazon Echo, Amazon Tap or Amazon Echo Dot.

Amazon Tap On the Go

Some buyers might want to give Amazon Tap a try because it’s $50 less than the Amazon Echo. However, I’d still recommend the more expensive Echo if you plan to keep it at home or in an office all the time. It’s got a better speaker system and comes with a handy remote that can be used from other rooms. The Amazon Tap’s mobility makes it more attractive to those often on the go.

The Tap is smaller and lighter than the Echo (specs are below). It’s similar to other portable Bluetooth speakers. The built-in battery makes the Tap a great “on the go” tool with up to 9 hours of continual use. Alexa will tell you when the battery’s getting low and needs a charge. You can always see the exact battery percentage from the Alexa app.

The Tap won’t always listen for voice interaction like the Echo does. That’s probably due to possible battery drain. You have to tap the mic button on the front every time you want to speak to the Amazon Tap. The Echo listens for the words Alexa or Echo and responds when it hears it. The Echo often hears things that sound like Alexa or Echo when you don’t want to interact with it. That’s not an issue with the Amazon Tap. 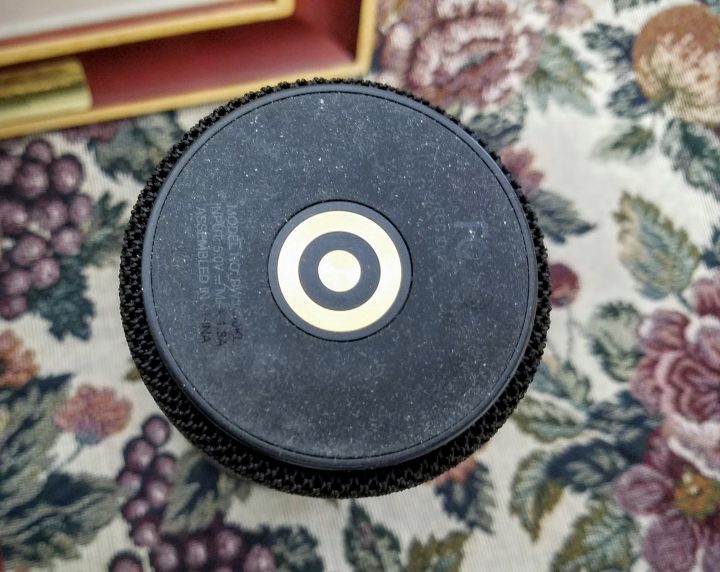 Charge the Tap up using the included charging cradle. It plugs into a wall outlet thanks to the included AC to micro-USB adapter. Users could also power the cradle with any micro-USB cable plugged into a car charger or computer USB port. This way the user can leave the cradle on a nightstand or desk at home and then quickly pick it up without disconnecting wires. 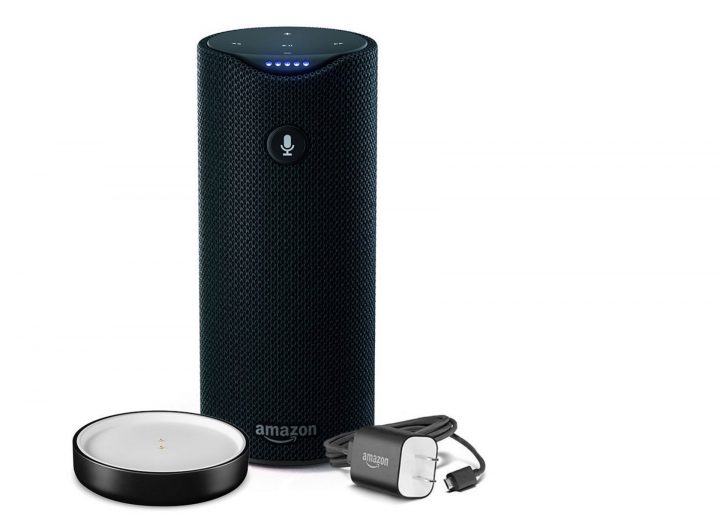 The Amazon Tap must always connect to Wi-Fi to work. However, adding new Wi-Fi networks is trivial. Fire up the Amazon Alexa app on a phone or tablet. Go into Settings to update the Wi-Fi the same way you did to set it up the first time.

After the first connection to a Wi-Fi network, the Tap always connects when it’s in range of that network. People not concerned about using up their phone’s data can turn their phone’s hotspot feature on and connect to it. It also handles some public hotspots that force users to login via a web-based login. 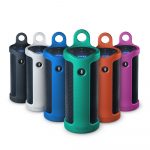 Amazon sells some colored holders called Amazon Tap Sling (see images in slide show above) for $19.99. They’re silicon holders that surround the top and bottom edges of the Tap. The loop on the top back part lets you connect it to a bag, hang it from something or just hold it while carrying the Tap. You’ll have to take the sling off to use the Tap with the charging cradle.

Everyone seems to make portable cylindrical Bluetooth speakers, but none of them come with Amazon’s excellent voice command technology built-in. We’ve already covered the Alexa part of the Tap. How well does the physical hardware stand up?

The Amazon Tap looks like a miniature version of  the original Amazon Echo. The Tap measures 6.2-inches high compared with the Echo at 9.25-inches. The Tap is also about an inch narrower than the Echo. It weights only 16.6-ounces compared to 26.9-ounces for the Echo.

The Echo’s speaker sits at the bottom while the speaker makes up the entire length of the Tap.

Users will find the play/pause button, volume buttons and back/forward buttons on the top. There’s no remote like you get with the bigger Echo. The material that makes up the top control area gets dirty easily. You can wipe it with a damp lint free cloth to clean it, but plan to do that a lot if you want to keep it clean. 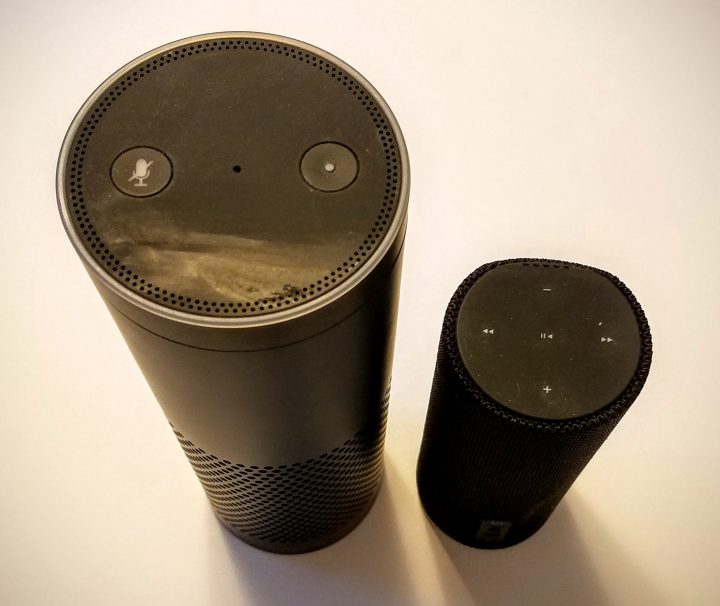 On the front edge is a little lip with holds five holes. That’s where the mic sits. It also houses the indicator lights that show when it’s listening or responding to input.

On the lower back we find the power button, which also lights up. It turns orange as the Tap is waiting for setup. Then it turns white when it’s ready to use. Press it once to turn the Tap off or back on. Press and hold the power button to put it in setup mode.

Interact with the Amazon Tap by pressing the mic button on the top front of the speaker. The mic recognizes voice commands accurately.

The speaker sounds decent. It’s loud enough to fill an average size room with plenty of sound. Don’t expect great sound, however. It sounds a little tinny and distorted at the loudest levels. Turning it down by pressing the volume button a few times improves sound quality a little. Music will sound better on almost any other decent set of speakers, but spoken word such as audio books or podcasts work great with the Amazon Tap speaker. Responses to inquiries and commands sound fine.

The Amazon Tap works as well as the Amazon Echo. It also includes all the cool Alexa Voice Service Skills that the larger more expensive version has. At $129.99 it’s still a little pricey.

I still wish the Alexa app turned my phone into an Echo device. Amazon put the feature into the Amazon Fire TV and Fire tablets, so they could put it into the app. Until they do, the Amazon Tap gives users the best option to bring Alexa on the go. Alexa works better than Siri for the things that both services can do. It’s also better than Google’s voice service for the things she’s designed to do. Amazon keeps adding more and offers users a weekly update of new features and Skills.

The Amazon Dot will turn your stereo system into an Echo at a lower price and it’s always listening.

The Amazon Tap deserves our recommendation as a great portable option with a decent enough speaker to use on the go.