According to a report, Amazon is set to refresh its Kindle line of e-reader and tablets later this year with new products. The company will launch its first Kindle e-ink e-reader with a front-lit display and also a new larger screen Kindle Fire tablet, which will be based on Google’s Android OS but will be heavily skinned with Amazon’s UI much like the current Kindle Fire slate.

A source to Reuters revealed plans for the front-lit e-ink Kindle e-reader display after having seen a prototype of the device. The feature will allow readers of the e-ink display to read in dimly lit or dark environments without the need to purchase an external book light. Though the feature will make its debut on the Kindle, it had appeared in the past on Sony Reader, an e-ink rival, and more recently on competitor Barnes & Noble’s Nook Simple Touch with Glow Light.

“I do see demand for a front-lit Kindle,” said Jennifer Colegrove, Vice President of Emerging Display Technologies at DisplaySearch, an NPD Group company, which monitors trends in the display sector. 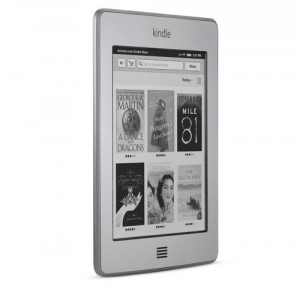 The upside of the front-lit display would be the convenience factor, but the downside is that it will have some marginal impact on the Kindle’s battery life. As the Kindle has battery stamina, this should not be a huge hit. As the LED light would cost very little–approximately $10–it is said that Amazon may keep prices on par or increase prices slightly to offset costs.

There were previous rumors of a color e-ink panel, but that may not happen at least this year.

Instead, for color, Amazon is said to be releasing a larger version of its LCD-based Kindle Fire tablet with an 8.9-inch display. An 8.9-inch and even a 10-inch Kindle Fire tablet were both rumored since before Amazon debuted the 7-inch tablet, which captured a big market share due to its more economical price point in the Android slate market.