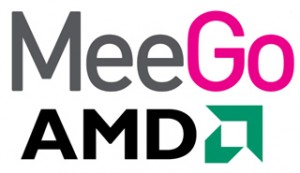 While Intel and AMD are rivals in the chip space, AMD is now backing the MeeGo platform that is developed jointly by its rival and Nokia. MeeGo is an open-source operating system that is based on Linux and promises many powerful features, and Nokia’s support of the Qt development environment means that Symbian apps can easily be re-compiled to run on MeeGo. MeeGo will be supported on tablets, smartbooks, netbooks, in-car systems, home set top boxes, and also as an embedded operating system, giving it appeal to AMD as there is potential to sell more chips to the emerging smart devices space.

According to AMD, “We will put resources, invest time and money where we think we can put meaningful contributions. If you think GPU/CPU can’t make a difference, beware. I really look forward to working with you guys.” The company is said to be providing engineering resources to help the MeeGo development process:

“MeeGo represents an exciting, open-source mobile operating system we expect to be adopted by mobile and embedded device makers over time,” said Ben Bar-Haim, corporate vice president, software development, AMD. “We are glad to provide engineering resources to joint industry efforts like MeeGo and expect that this operating system will help drive our embedded plans and create expanded market opportunities for our forthcoming Accelerated Processing Units.”