Most folks have noticed AMD quite absent from the Low Voltage / Ultra-Low Voltage space, thus the reason you don’t see them in the likes of Motion Computing’s LE1700, Fujitsu’s U810, Lenovo’s X61, OQO’s Model 02, and Dell’s Latitude XT. With their most recent PUMA announcement, AMD is taking mobile computing seriously; and now with their upcoming Shrike platform, they plan to enter the thin and light space with a vengeance.

Shrike is AMD’s first substantiation of their Fusion architecture, which combine the GPU and CPU, along with southbridge, on to a single piece of silicon.

Shrike will begin hitting the market the 2nd half of 2009. Considering how fast the ultra-portable space is moving right now, that is eon’s away.  It will certainly be good to see another player enter this space and will bring some good competition for Intel and Via.

Shrike will not compete against Intel’s Atom or Via’s Isaiah. However, I wouldn’t rule them out of that space, either.

For those wondering, Shrike is a passerine bird that impales its’ prey on thorns, which helps them to devour the flesh. 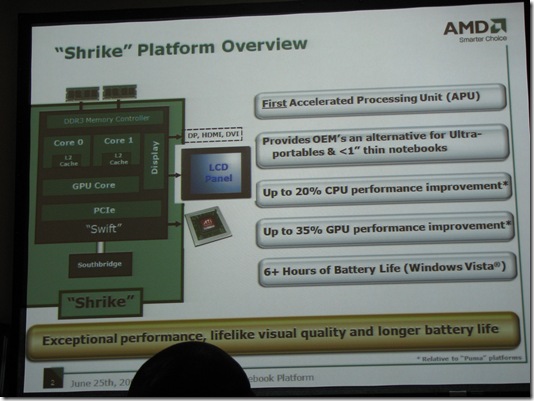