My wife wasn’t too concerned when I received a Valentine’s Day card from another girl yesterday. In fact we both laughed about it and we both applauded AMD for a creative PR stunt. AMD launched its power sipping APU at CES 2011 and I really liked them. The APU earned Notebooks.com’s Best Innovation Award at CES 2011 and two PCs with APUs won awards of their own.

Maybe the folks at AMD took the awards as a sign that I love APUs just a little too much. Here’s the Valentine’s day card AMD sent over: 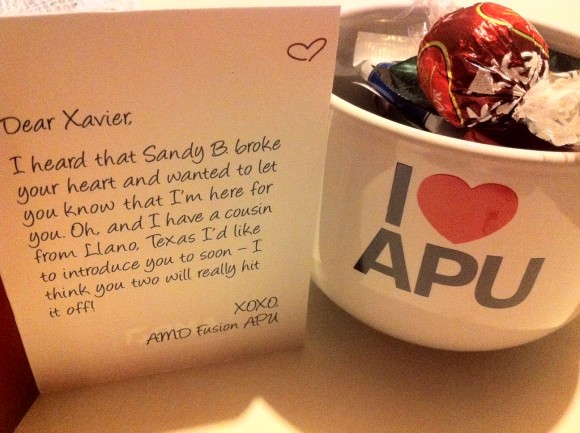 I heard that Sandy B broke your heart and wanted to let you know that I’m here for you. Oh and I have a cousin frmo Llana Texas I’d like to introduce you to soon – I think you two will really hit it off! XOX AMD Fusion APU.

Clearly AMD is poking fun at Sandy B (Intel’s Sandy Bridge) breaking hearts because of manufacturing issues that have caused recalls and slower notebook rollouts.

Thanks for the laugh AMD and for the chocolates.