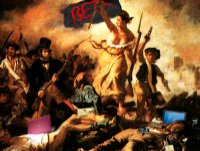 I’m going to issue a rousing second, or amen, or here-here, to Jesus Diaz’s Call For Revolution Against Beta Culture. I am in absolute agreement with Jesus on this. Things have gone a bit too far as we now accept inferior, not quite ready hardware and software as the norm when things are released, knowing that a fix is being planned for the next release or update.

Jesus correctly points out that this Beta Culture has guilty parties all around, including those of us who feed the beast by writing about the latest and greatest gear that pops onto the market, the consumers, the manufacturers and their ridiculous and overlapping product cycles. But at the heart of this, is something simple and pure. When we plunk down our dollars for a piece of gear or software, we just want it to work straight up. Here’s the money quote:

We have surrendered in the name of progress and marketing and product cycles and consumerism. Maybe those are good reasons, I don’t know, but looking at the past, it feels like we are being conned. Deceived because the manufacturers of electronic products have taken our desire to progress faster and even embrace the web beta culture as an excuse to rush things to market, to blatantly admit bugs and the rushed features sets and sell the patches as upgrades.

What is it about human nature that leads us down this path? It isn’t just in tech, it is the same in many businesses. Goodness knows in my business of producing theatre, I’d love to kill the idiot who decided that inviting reviewers on opening night was a good thing. No show (unless you count Broadway where they can afford to have endless rounds of preview performances before inviting the critics in) is ever truly ready on opening night, simply because our product needs audiences to be fine tuned.

But back to tech, we’ve seen this grow and expand to the point that we’re willing to plunk down dollars for just about any new device or piece of software. Jesus correctly points out that the iPhone 3G had serious problems on its release. I get the impression that Google and T-Mobile are treating the G1 the same way. In our niche here, the UMPC was nothing more than a beta rollout of not-ready-for-primetime hardware with a massive (and, as it turns out ill-conceived, viral marketing campaign). Vista is looking more and more like a beta for Windows 7, although I don’t think it started out that way. Nokia seemed to have a sensible approach with its Internet Tablet on its first release. They basically said that the first and later early generations were not aimed at the mass market but at the geeks who would then help them progress towards an eventual consumer product. They seemed to be addressing the issue sanely, in my view, but did it work? We won’t know until we get further down the road, but the luster is off that device, at least for the moment. It appeared that Intel was going to follow a similar path with MIDs, with an ultimate goal of having the technology and market coincide a few years down the pike. Again, too early to tell, but the boo-birds are already out based on the early returns. In both cases, (Nokia and the MIDs), the rush of other products to market in the same niche outstripped what appeared to be a rational long range vision.

There’s an old expression that makes sense in this crazy cycle of cynical con gaming. Throw something against the wall and see if it sticks.

Again, I’ll add to the call, and I’ll offer a suggestion. Consumers should demand Beta pricing. That’s right. Instead of the high price on gadgets and devices when first released, slip them into the mainstream at rock bottom prices, if what you’re looking for is to create a market for something new that isn’t quite ready yet. But wait, you say, that happens with software all the time doesn’t it? Isn’t Beta software free? Yes, it is. But isn’t it intriguing that we see very few successes once companies have to begin charging for their services in order to recoup costs?

Jesus speculates that perhaps the recession or financial apocalypse that we are just beginning to live through will offer up a change. Maybe, maybe not. I’m not sure anything could really change the cycle completely, even if consumers just stopped buying due to hard times. But I’d like to see it happen.

And with that, I’m going to go rehearse a show that probably won’t be quite ready on its opening night in a week, continuing my part in all the madness.