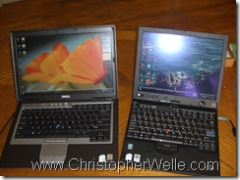 Christopher Welle, who goes by L0GiX on the GottaBeMobile.com Forums, recently purchased a Lenovo X61 Tablet PC and is posting up his impressions – the good, the bad, and the ugly – in a series of articles on his blog. For those of who have followed his highly popular Q1U Tweaks thread, you’ll know that Christopher is very thorough and honest in his evaluations, and I expect nothing less in regards to the X61. Check out his articles if you are considering an X61.

I’ve mentioned before my need for a light weight machine. I thought this was going to be a UMPC, but I learned something about my Computing needs with it and soon returned it.

I started to look around for a mini laptop such as a Fujitsu P1610. Soon after the Samsung Q1U came out, the Lenovo ThinkPad x61 Tablet was sent out to key Bloggers for evaluations. I followed these posts as I was putting the Q1U through its paces. I liked hearing about the performance of this nice little Tablet.

Three weeks after returning the UMPC I decided to purchase a Lenovo ThinkPad X61 Tablet.

I received it a week ago. I’ve held off from blogging about it until today, to give myself time to get the feel of it and tweak it to my needs.