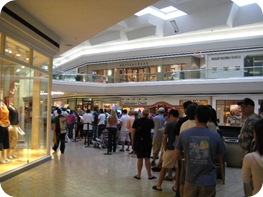 Well, no dice today as far as purchasing an iPhone 3G, but it sure was an interesting look into human nature and retailing. We pulled into the mall about 7:40am and entered to find a line of about 100 folks or so already. That line eventually grew to about 300 or so. Although the store hours were posted as opening at 10am they were taking customers in beginning at about 8am. This upset some folks in line who got there later, but it made sense to me. A Starbucks nearby in the mall was doing a brisk business, but it was interesting that other food concessions in proximity weren’t open. I’ll give this Apple Store credit. About 10 minutes to 10 they came out and told those of us past a certain point that we wouldn’t have any luck today. I thought this was a smart thing for them to do. No use in having folks hang around without info and filled with anxiety.

I saw very few folks in line with 1st Gen iPhones, but saw just about every other type of phone you could imagine. Those closest to me seemed to favor either Verizon or Sprint based on the labeling. So, at least in this line it was a day many planned on switching. That said, there were more demos of other phones going on in this line than you could shake a stick at, as well as comparisons of different service plans. AT&T must be thanking its lucky stars. The number of comments I overheard about how much some hate AT&T was remarkable.

Speaking of AT&T, the activation process seems to be a real wrench in the works. This store was only taking folks in 4 at a time and on average once this process started it seemed like it took about 20 minutes at best between groups of 4 going in, which isn’t all that bad, but it certainly isn’t a speedy process.

On the way home we stopped by the local AT&T stores to visit the now familiar group of dour clerks there. Several were standing out front watching folks walk into the Sprint Store next door. Only info they are ““allowedÃ¢â‚¬Â to give out is that a direct fulfillment order (pay now and wait) will take 10 days to 3 weeks. On pressing a bit, I found out that today was the first day they were able to deliver on some (not all) fulfillment orders taken on launch day. I’ve said this before, these folks don’t seem too thrilled with how things are going. I asked them if they were even trying to convert customers to other products and the answer was ““what’s the point?Ã¢â‚¬Â I’m sure Apple and AT&T have already made a pile of money since last week and will continue to do so, but it sure looks like they are leaving a pile on the table currently. Certainly these AT&T employees don’t seem like they are getting to share in any of the good times. I bet that memo that got leaked earlier this summer about not taking vacations during this period isn’t sitting all that well with employees in empty stores. In contrast, the Sprint store was doing a brisk business today with customers standing two and three deep at the sales desks.

Based on several conversations while standing in line at the mall, the euphoria was still high with many, but fading with some others. One guy was going to drop a ton of cash today. He told me he was going to purchase a family plan for the iPhone (3 phones), two iMacs, a MacBook Air, and Apple TV. He said it was time to redo everything for his home. But after the announcement he packed up the wife and daughter (they had brought chairs) and said they were off to Circuit City.

It will be interesting to follow this in the days ahead and see if Apple and AT&T come out from behind their corporate silences to address any of the issues surrounding this recent launch. On the one hand they have to be pleased that Apple’s amazing hype machine has created such a demand for the product. On the other hand, a comment I heard in line seems telling. This is a paraphrase to leave out the expletives and not a direct quote. ““The last time it was easy after the initial day and that was a party. Somehow Apple caved into AT&T with this activation stuff and sold their soul to the devil. They should have had more faith in their high flying hype and done a better job of setting customer expectations. They got praise for handling the first launch. They squandered all of that good will. This isn’t a party this time around. It is turning into a wake.Ã¢â‚¬Â Contrast that with this comment: ““If I ever get my hands on one, I think I’m going to explode with excitement.Ã¢â‚¬Â

It takes all kinds.