Twitter announced yesterday that they are about to start monetizing mobile even more soon. If you are running the official Twitter app on your iPhone or Android device, you’ll soon see promoted tweets in your timeline. And why not, you’re probably already following a celebrity that gets paid to tweet.

It’s easy to get upset at Twitter about this but you need to step back and think about it before you do.

While I am sure there is plenty of investor money behind Twitter, those investors need to see a reason to keep investing. Twitter has to profit somehow, right? If Twitter relied on ad money alone to pay its employees and continue to stay up, I think they would already have shut down. I might be wrong, but I don’t think so. Let them capitalize on the massive monster they’ve created.

We’ve had a simple philosophy since we first launched ads on Twitter, and it’s this: We strive to create products that put users first, and continue to enrich your Twitter experience. Today’s news represents another important step in our advertising efforts, and we hope you like it. 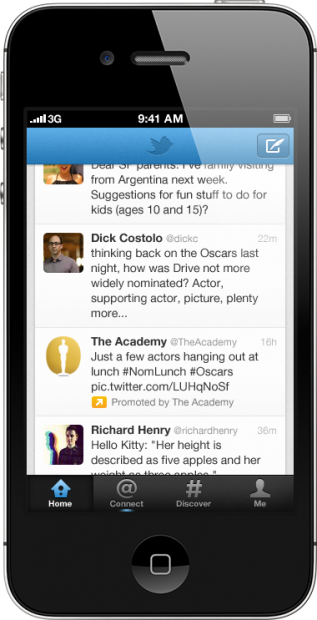 Also, how many of you actually use the official apps still? Android and iOS have some awesome 3rd party apps and I highly doubt many experienced users are still using the official apps. Again, this is me assuming, but I think I’m be right.

Personally, I use Tweet Caster for Android. I rarely use my iPhone, so I do still use the official app on it. If I used my iPhone 4 regularly, I would take the time to find a quality 3rd party app. I am sure Xavier, Josh, and the rest of the GBM gang would steer me to an awesome app quickly.

What are your thoughts?

Like I said, I am ok with it. Twitter is a service that’s free to use and there really isn’t a way to monetize the service any other way.