Chikita uses data from its large ad network to see how popular different devices are on the web. According to the company’s numbers from January 2013 the iPad is still the clear leader in web usage, but Android tablet usage is slowly increasing. Android still has a long way to go to catch up, however. 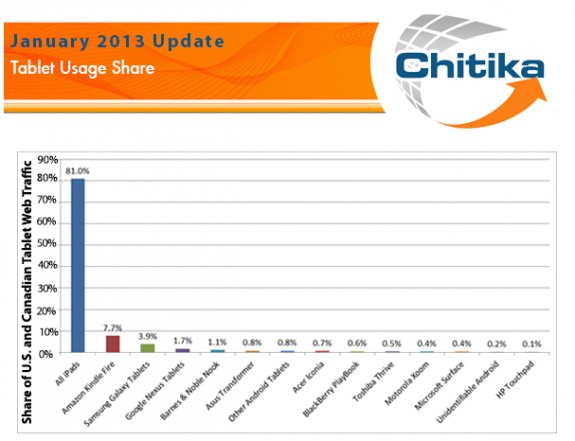 Out of all the Android tablets in the study, the Amazon Kindle Fire led tablet web usage by a wide margin. Even after combining the next three spots on the graph, Amazon is still in the lead. Combined the Google Nexus, Samsung Galaxy and Barnes & Noble Nook tablets held 6.7 percent of all tablet web usage during the month, that’s 1 percent less than the Kindle Fire.

All Android tablets did see gains, however. Amazon Kindle Fire usage grew “from 4.88 impressions per 100 iPad impressions … to 9.48 impressions, or 7.7% of the market as a whole.” The increase bumped the Kindle Fire share of tablet web usage from 4.25 percent up to 7.7 percent.

The numbers may show that users are buying more non-iOS tablets from a wider range of manufacturers, or it could just mean that users are browsing the web more than their tablets. Without sales numbers it’s hard to say for sure.

Apple said it sold 22.9 million iPads last quarter, but Amazon refuses to give numbers for its tablet sales. Amazon will only say that it continually sells more Kindle devices every year.