Today at the Slush 2011 startup conference in Helsinki, Rovio CEO Mikael Hed announced that their flagship game, Angry Birds, has been downloaded over 500 million times.

As impressive as this accomplishment is, the video Rovio played to trumpet this news also included some other statistics, including that gamers have spent over 200,000 years (collectively) playing Angry Birds games.

Human life has existed on this planet for around 200,000 years. I want you to think about that.

The success of Angry Birds exceeded even Rovio’s high-flown expectations. A year ago they thought reaching 100 million downloads in 12 months would be the bee’s knees. Now they’re looking at 5 times that much and still growing. 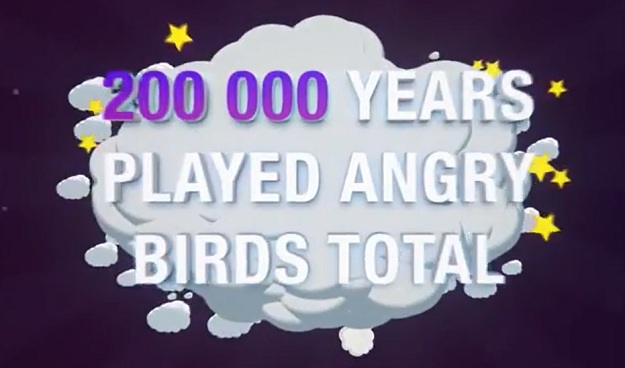 And Rovio is about to capitalize on that success in a big way. We’ve already seen a ton of licensed Angry Birds toys (I like the big plushies best), some T-Shirts (I own one of the black bird), and pretty much any other product they can slap some birds on from decals to toothbrushes (I will not reveal if I own such a thing).

There is so much Angry Birds merch that the company will open a store in Helsinki soon to sell it to people. How long do you think it will be before this phenomenon surpasses Hello Kitty for widespreadness and number of random licensed products? How long until we see something like this (that link is NOT safe for work) molded in the shape of the yellow bird? Or the toucan?

As much as this future terrifies me, I’ll still lift my glass in congratulations to Rovio. Angry Birds is an awesome game that just keeps getting better.