Having fleshed out their Angry Birds franchise with mobile games taking place in space, during holidays and in the Star Wars universe, Rovio is expanding the franchise to include racing with Angry Birds Go.

Set for a release on December 11th, Angry Birds Go brings the title characters into their first 3D world. The gameplay mechanics are simple enough to understand. Users choose a specific character to race against the pigs and defeat them on wacky race tracks. To bolster the game’s racing mechanics users can also use each character’s special power up to defeat opponents during the race.

Although it introduces Angry Birds into the equation, the game isn’t that different from what users have come to expect from other arcade racers like Mark Kart. Rovio is teaming up with Hasbro to use the company’s TELEPODS technology to bring real-world toys in-game. Users will be able to add specific carts using Telepod toys purchased from retail stores. 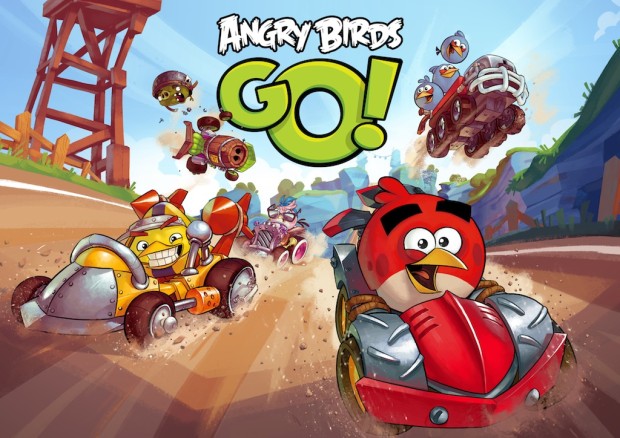 Angry Birds Go was built specifically as a free-to-play game. That means users won’t need to purchase the game up front, however they can upgrade the carts their characters race with through each platform’s in-app purchase systems. The company says that the game will launch on iOS, Android, Windows Phone 8 and BlackBerry 10. Previous games in the franchise weren’t always free for users to play on Windows Phone. It also sounds like Rovio won’t rely on in-game advertisements like it did Angry Birds Seasons for Android based on today’s press release.

Rovio hasn’t commented on if there will be platform specific features for each version of the game. For example, it’s not yet known if the version for iOS will support physical controllers or if the Windows Phone version will have Xbox LIVE Achievements.

Users who want to try the game won’t necessarily have to wait until launch day, Angry Birds Go will come to users through a special application later this month. When that countdown application arrives, it’ll be free to all users.
Related Topics:Angry BirdsAngry Birds Go!