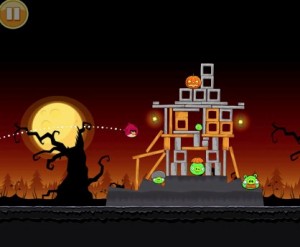 Halloween has become as commercial as the Christmas holidays, at least here in the US. If you peruse the Apple App Store you’ll see a range of Halloween themed games and book titles appearing. I think I’ve been emailed about 10 different versions of Dracula or some vampire themed book/game. Lots of folks are trying to cash in during the next few days, and with some of these Apps free and some priced for impulse buying at $.99, I’m sure some will.

One developer that will probably rake in some Halloween cash is Rovio, the creators of Angry Birds. They’ve got an Angry Birds Halloween edition for the iPhone (at $.99) and one for the iPad ($1.99) and based on the runaway popularity of the original Angry Birds I’m sure they will see quite a few sales. The original has supposedly raked in over $6.5 million in sales. When the official Angry Birds release for Android got released last week, it crashed the servers of the host (it wasn’t offered initially on the Android Marketplace, but that quickly changed) and sales were reported as over 1 million for the Android version. I haven’t seen if there is a Halloween version of Angry Birds yet or no.

I have to admit I avoided the Angry Birds addiction for quite some time, but damn it, curiosity (or was that peer pressure) got the better of me, and I have to say the original is quite addictive. I’m trying to stay away from the Halloween edition like I do Halloween candy. I usually don’t succeed at the latter as I’m a sucker for candy corn.

Also of note, Chillngo the publisher of Rovio’s Angry Birds was just bought by Electronic Arts for $20 Million. Everyone assumed it was because of Angry Birds, but the Rovio folks say that’s not the case. Their birds will not be going to EA according to them.