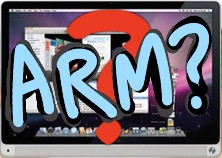 Dean Takahashi at VentureBeat claims that PA Semi, the chip maker Apple acquired last year, has split their efforts between the iPhone/iPod touch and the inevitable Apple tablet.   This jives with similar speculation from MacDailyNews from back in December. Makes sense to me. You spend millions on a chip maker, you better have them make chips. But then it wouldn’t be running an Intel processor, but ARM (or some unknown new system). If true, this opens the path for a whole new round of rumors. Will it run Mac OS X, the iPhone OS, or some different variant? Will it run iPhone apps? Act as a simulation  platform for developers? Both? Let the speculation run wild!