Anoto Pen Coming to the Blackberry 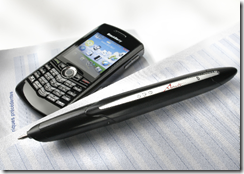 Interesting development from Anoto Pen, announcing an integration point for their digital pens with Blackberry phones.

Read the press release here, and their case study here.

A new software package from PaperIQ will make it easier for end-users to combine the benefits of two of the most popular productivity tools, BlackBerry ® smartphones and Digital Pen and Paper (DPP).

The Anoto Digital Pen Integration Kit for BlackBerry provides everything required to integrate Anoto’s digital pen technology with a BlackBerry smartphone application or enterprise system.
As it is an Ã¢â‚¬Ëœout-of-the-box’ solution that requires little development, the integration kit will make it easier for channel partners and in-house IT departments to create combined BlackBerry ® and DPP applications. The kit also enables any existing paper-based forms Ã¢â‚¬” for example a patient record form Ã¢â‚¬” to be printed with the Anoto pattern, so that they can be used with the digital pen.

The combination of Anoto’s digital pen with BlackBerry smartphones enables mobile workers to electronically capture and transmit data when away from their desks. The Anoto digital pen records what is being written onto a form printed with Anoto special dot pattern. This data is then transmitted back to the office via a BlackBerry device for further processing Ã¢â‚¬” without the need to type up notes.