Stratus, a new mobile identification system that boasts compatibility with the iPhone 4 and iPhone 4S is on its way to customers, delivering retina and fingerprint scanning and much more.

The solution, which was funded in-part by $3 million in research cash from the United States Department of Defense, is at its very core a biometric jack of all trades. It accomplishes this by using nearly all of the sensory tools at an iPhones disposal including the device’s camera to take pictures, and it’s microphone to record voices.

The hardware device itself also has the ability to scan the human eye and scan fingerprints. The Stratus hardware and its iOS application will cost organizations $199 and begin shipping at the end of April from Aoptix. 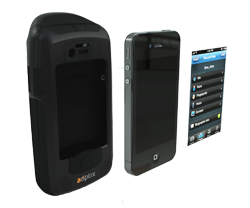 The Stratus’ capabilities make it well suited for use in law enforcement and security, no doubt one of the reasons the Defense Department decided to fund the system.

Currently, law enforcement agents who work in remote places or who are charged with weeding through long lines in transportation environments, must either purchase expensive and bulky equipment and position it as close to the line of people they are hoping to identify or, process each person in a separate area one by one.

With Stratus, that problem is gone. Because the Stratus is compatible with the iPhone 4 and iPhone 4S it can be used almost anywhere. Additionally at $199 plus the cost of an iPhone, it is cheaper than buying other PC based equipment to perform the same functions.

Though the hardware accessory itself will be the thing that those being identified interact with most, the device’s sister iOS application also seeks to make the process of identifying someone easy for the user operating Stratus as well. The application will automatically guide the operator in taking a picture or eye scan that it can use, keeping errors and wasted time to a minimum.

The Stratus app also allows the operator to create a complete profile of every person they are seeking to identify, including someone’s eye scans, face scan, voice print, fingerprint, and any other biographical information that might be needed in the future. The app can these transmit this data via the iPhone’s data connection.

The company will also make a software development kit available to organizations who purchase Stratus so that they can create solutions tailored to their direct needs.

In interviews with CNN, the Aoptix’s Joey Pritkin also made it clear that they’d investigated other platforms before initially deciding to go with the iPhone, but settled on it because:

“It is very secure as a platform, which is, naturally, important to our customers,” continuing on he says the team also chose the iPhone because of its stability and relative ubiquity of its hardware.