Christmas sales may be down in the traditional and on-line outlets, but from watching the Apple App Store, it looks like developers are going crazy trying to fill up the store with applications for the pre-Christmas and post-Christmas rush. I monitor a couple of feeds of new and updated apps and my feedreader is constantly crammed with new updates. And I mean crammed, it is the most volume of any tech news sector that I’m seeing.

I’m seeing lots of interesting apps and quite a few silly ones. Since Apple decided to relax standards there has been a rush of …. well, there’s no easy way to say this, but apps that enable the user to play the sounds of flatulence. Pulling fingers and whoopie cushions aside, there’s also an uptick in novelty magic tricks which I’m guessing will be shown to nieces and nephews at many a family holiday gathering. We’re also seeing quite a few games pop up from some major players, the latest (at least as of this hour) Sim City.

We also seeing a raft of updates, some that promise the ubiquitous bug fixes, and some that even promise and update the version number. Yeah, that’s always important. 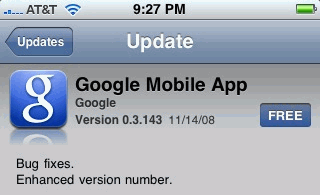