Last Friday, Apple pulled AppGratis, the popular app discovery tool from the iOS App Store, and today the AppGratis’ CEO took to the company blog to explain the situation from his point of view.

AppGratis CEO Simon Dawlat explains that he started AppGratis back in 2008, but it wasn’t until 2011 that his company had to start talking through issues with Apple regarding its App Store guidelines. At that time AppGratis was potentially breaking three of Apple’s rules, though quick fixes fixed them all. 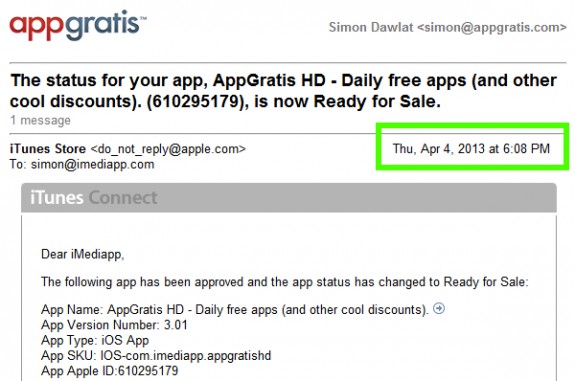 After working with Apple, AppGratis solved spamming issues by combining its localized apps into a single global app, proved to Apple that users can’t confuse AppGratis with the App Store and showed that its app was more than just a repackaged website.

Dawlat assumed he was in the clear when Apple approved version 3.0 of the company’s iPhone app recently, and approved its first iPad app last week. After talking with two members of Apple’s App Review team, a third member came in and decided to overturn the previous Apple App Reviewers.

Guideline 2.25, which the company previously proved it didn’t violate, reads:

Apps that display Apps other than your own for purchase or promotion in a manner similar to or confusing with the App Store will be rejected.

A ruling that AppGratis violates the guideline is strange as the service doesn’t in any way try to confuse users into thinking AppGratis is the App Store. Even more confusing is that Apple’s partner Facebook offers a more robust App Store replacement in its main app with App Center, yet it doesn’t appear to violate guideline 2.25.

Apps cannot use Push Notifications to send advertising, promotions, or direct marketing of any kind.

While the app does tell users when a new deal is ready, it’s no different from other apps that offer deals on iOS apps or even other shopping apps. Amazon’s iPhone app, for example, sends a daily Push notification when the day’s Lightning Deals are available, urging them to open the app.

Though AppGratis isn’t available in the App Store, the app will continue to offer deals to its users everyday. Dawlat says the service has about 12 million users who downloaded millions of apps since the app was pulled on Friday. With any luck, it will find its way back into Apple’s good graces.