Apple’s 2013 product lineup isn’t set in stone, but we do expect to see new versions of Apple’s most popular product lines, including the iPad 5, iPad mini 2 and either the iPhone 5S or iPhone 6.

Earlier this week analyst Ming-Chi Kuo of KGI securities offered his thoughts on the upcoming Apple products, claiming a Apple is holding the biggest product announcements for summer and fall. Kuo is one of the more accurate analysts thanks to ties deep into Apple’s supply chain, and adds to rumors of a cheaper iPhone.

Designer Martin Hajek is well-known for his renderings of the iPhone 5 from last year, and he continues the tradition with a mock-up of Apple’s potential 2013 lineup of devices. 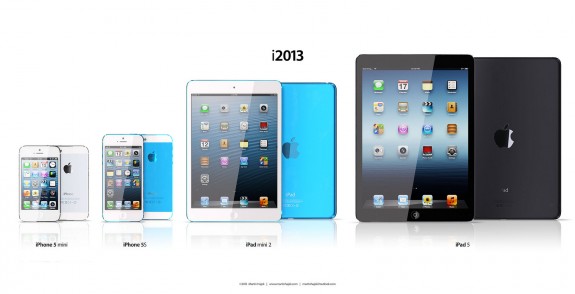 Let’s take a quick look at each of these potential new Apple products. Visit Martin Hajek’s Flickr account for a larger version.

The iPhone 5S is rumored for a summer release, likely around Apple’s WWDC 2013 event. We’ve heard rumors that the next iPhone could be the iPhone 6, but with Kuo and another analyst, Brian White sticking to the iPhone 5S name and Apple’s history we could be waiting for 2014 to see a full on iPhone 6. 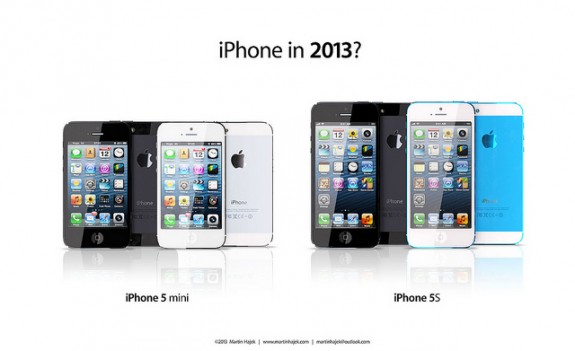 Possible look for the iPhone 5S and cheaper iPhone.

The image above shows the biggest potential outward change of the iPhone 5S, color. White believes the iPhone 5S will bring the first color options to the iPhone lineup since the white iPhone was introduced. If this is true, expect colors similar to the iPod touch lineup.

Read: Hidden Fingerprint Sensor Could Secure Your Next Phone

For features and performance, Kuo adds more specifics to the rumors we’ve heard, calling out an Apple A7 processor, a better rear camera with an f2.0 aperture and smart LED flash as well as a fingerprint sensor.

The iPhone 5 mini in this mock-up matches the size of the iPhone 4S, but uses the iPhone 5 design language. This could potentially be the cheaper iPhone that we’ve been hearing rumors about.

Read: Why a Cheaper iPhone Doesn’t Matter to You but it does to Billions

The iPad 5 may be on track for a release in March, and current rumors suggest Apple may be planning a thinner lighter display. It may be an IGZO display which would also improve battery life and touch responsiveness based on the demos we saw at CES 2013.

The iPad 5 is also rumored to adopt the design language of the iPad mini, shrinking in size and gaining an aluminum back. We may also see a smaller bezel. Odds are the iPad 5 would also use a new processor, but rumors don’t call out a specific Apple A processor. 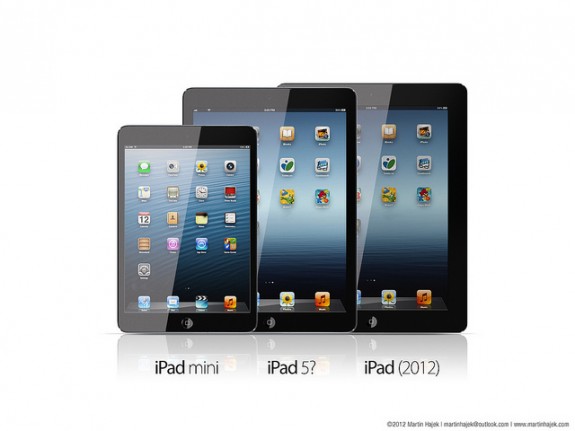 The iPad mini 2 is rumored to receive a Retina Display, which would likely include an upgraded processor to power a higher resolution display.