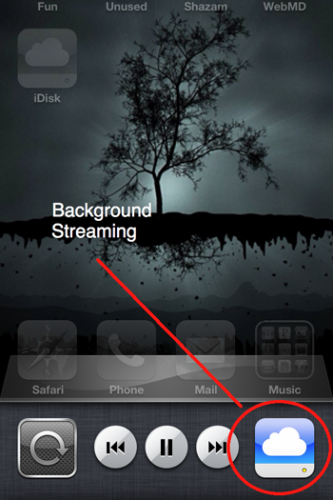 Michael Robertson has a post on his blog that points to a unique little tidbit in the ongoing media wars. It’s no secret that Apple, Google, Microsoft, and just about anyone else with skin in the mobile game wants to make streaming media a part of their plans. Apple purchased music streaming service Lala awhile back and many thought we’d see something that incorporated that into the iDevice ecosystem by now. But the hangup has always been the music publishing houses and licensing. I’ve often speculated that many of Apple’s and Microsoft’s woes come from the DRM and restrictions placed on them by the media giants. But in recent years we’ve seen some softening of some of those positions.

But, back to Michael Robertson’s post. He points out that users of Apple’s iDisk (which I believe you need to subscribe to MobileMe to access) can now stream music from their computer to their iDevices. Apple apparently released an update to the iDisk App that makes this possible. As the post points out, it isn’t exactly iTunes in the Cloud, but it offers you streaming of music that you might choose to store on your iDisk. I’ve had similar functionality for quite some time now with my own personal cloud using PogoPlug, and I think there are ways to stream music using other services as well.

Robertson also hints that Apple is doing this somewhat secretly as the functionality isn’t listed upfront with the new features of the iDisk App. That may or not have been true, but I don’t think it is any longer.