Open the iPad App Store and tap on the Purchased Section. If it fails to load for a long time and then crashes the app, you’re not alone. Apple finally admitted to a person contacting tech support that the company is aware of the issue.

Fortunately, iOS 6.1 beta 4 seems to offer a fix and until Apple releases iOS 6.1 there’s a workaround.

The behavior affected us on an iPad mini and the third generation New iPad. The list looks like it’s trying to load, but after a very long delay it doesn’t do a thing. Then finally the app disappears kicking the user back to the home screen.

Here’s a two page thread about the issue at Apple’s support page.

Here at GottaBeMobile at least two of our staff experienced this. It seems to affect the iPad only and hits only those running iOS 6. We still own an original iPad and it doesn’t affect that device since it only runs iOS 5. The first post in the Apple Support Communities thread experienced the same with an iOS 5 iPad able to reach the section. 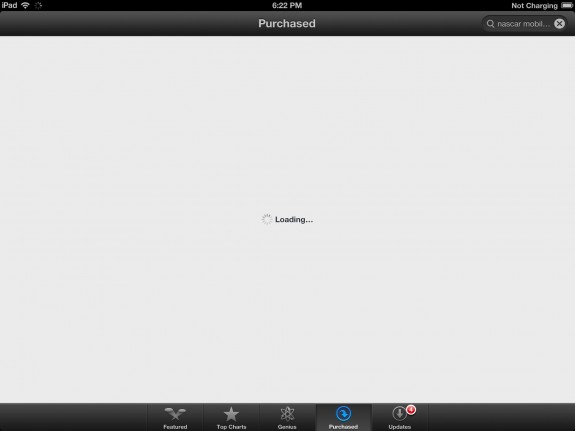 Patrick Jordan of iPad Insight experienced this issue and called Apple to see if they could offer a fix. The call bore no fruit except that they escalated his issue and told him they knew about it and could not offer a fix at this time.

The “Apple senior advisor” told Jordan that the issue affected those who own a large library of apps. His purchase history lists 1,212 iPad apps and 1,276 iPhone apps. One of our accounts with the issue shows 909 iPad apps and 1,254 iPhone apps purchased. We don’t know how many a person must own to put them over the threshold before they start experiencing this anomaly.

This acknowledgement from Apple brings hope that Apple may fix it in the final version of iOS 6.1. We can confirm that as of iOS 6.1 beta 4 it is partially fixed. When a user taps on the Purchased section it still takes a very long time to load the list, but the app no longer crashes. 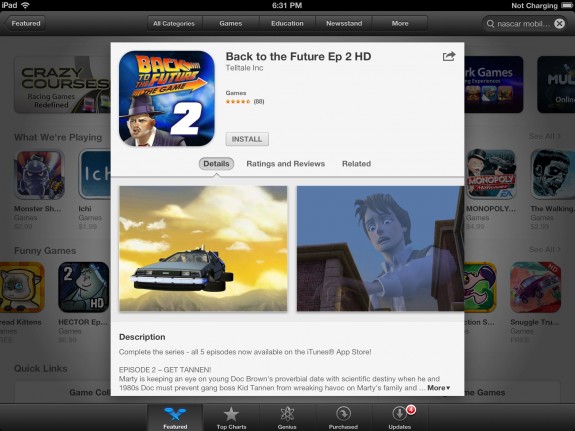 There’s a workaround until 6.1 shows up. Install purchased apps by connecting the iPad to a computer and transfer the apps via iTunes or find the app in the app store and download it there. All purchased apps will show a button that reads “Install” like the image above instead of the price. Apple doesn’t charge for apps installed this way from the App Store.