A new rumor tells us that Apple will announce a new version of AirPlay, called Apple AirPlay Direct, that streams audio from iOS devices to AirPlay enabled speakers or sound devices without the need of WiFi.

Currently AirPlay requires that both the source iOS device and the client speaker system or audio device must both run on the same network. Without a network it won’t stream at all. AirPlay Direct eliminates the need for a network.

According to the rumor posted on UK  news site The Telegraph the new version of AirPlay will run via Bluetooth making it the same as current Bluetooth streaming technology but with proprietary Apple communication technology. I assume the new technology must include something that will make this connection automatic without need of Bluetooth pairing. Otherwise it’s just an Apple branded version of what’s already available. 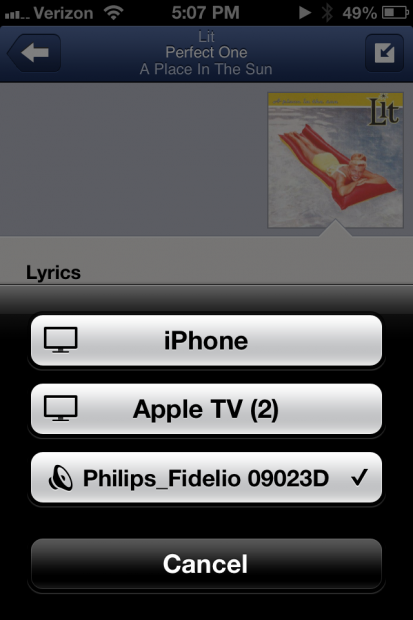 The report states that the announcement will come along with other Apple news like a brand new iPhone rumored to come September 12 and ship September 21. That same day Apple will likely announce a new iPhone with a smaller 9-pin connector.

See the video below showing what they allege is the new connector among other new iPhone 5 parts. The connector shows up at about 2:00 mark.

When I first heard this I thought it sounded great, but then I wondered what makes this different that current A2DP Bluetooth audio streaming? Of course the reports don’t offer any details, so if Apple does announce such a new AirPlay Direct system, it will need to offer more than simple Bluetooth audio streaming. Perhaps it won’t require pairing or maybe it will offer a stronger and more solid connection.

The new Apple AirPlay Direct, according to the report, is only a working titile and Apple might annonce it under a different moniker.