Similar to what Apple is offering customers who are searching for the iPhone 5, prospective iPad Mini customers can now visit Apple’s website to buy and reserve an iPad Mini for in-store pickup the next day. The system was created for both devices to help Apple fulfill consumer demand as the company is still having a difficult time ramping up supplies of the iPhone 5 and the newly introduced iPad Mini, with both mobile devices regularly selling out daily at Apple’s retail store locations. 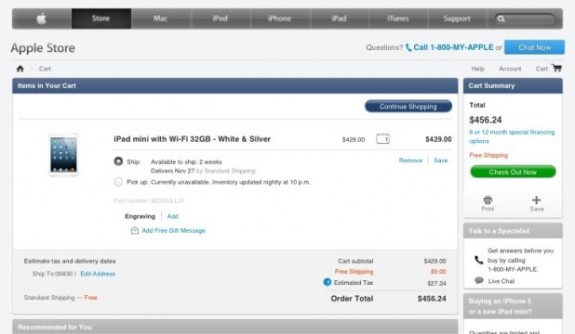 The iPad Mini is currently only available in WiFi. Apple is promising that a version with 3G/4G LTE will be arriving in a week, though for customers who had pre-ordered the edition with integrated mobile broadband, the phone is promised for a mid-November availability.

The tablet was introduced alongside a new fourth generation iPad tablet, which is similar to the third-generation model but comes with a better A6X processor along with the new Lightning dock connector port, standardizing the dock standard on all iOS devices spanning the iPod to the iPad.

The iPad Mini is a significant product for Apple for a number of reasons. First, for some users it represents Apple not playing a leadership role and playing catch up with the smaller form factor as Apple tries to compete with low-price rivals Amazon and Google with the Nexus 7. Second, the iPad Mini represents the first iPad for Apple with a screen size different than the standard 9.7-inch offering since inception.