Like the new iPad, the new version of Mountain Lion won’t have Apple’s full personal assistant, but it will be able to transcribe text. The dictation function is built into then latest version of Apple’s OS X and will be available in every app, even Microsoft Word.

The feature should work as well as the iPad feature, which is to say it will work most of the time, but will likely make a few mistakes from time to time. Apple didn’t show a long demo of the new feature at WWDC 2012. 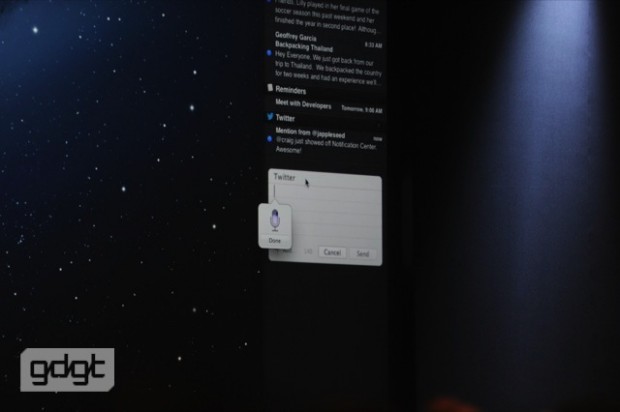 GDGT described the short demo that Apple showed on stage as really quick, which means the network was either really fast or the feature was pre-recorded. We hope it’s the former, though we’re not sure what it will mean for the end-user once Mountain Lion releases.

With Mountain Lion Apple will have dictation across all of its latest devices, with the new iPad and the iPhone 4S being the only devices with full-blown Siri. Dictation is a nice feature, but it’d be a much more complete ecosystem if Siri was available on Macs. Apple has a relatively consistent user interface across all its devices now, but not the same user experience. Siri makes the iPhone 4S and the new iPad stand out against the Mac and older iOS devices.

Those looking for more than just dictation on their Macs should take a look at Dragon Dictate, a voice-controlled application that allows users to launch applications and edit documents. That application is available for $199.99 and comes with a matching headset.