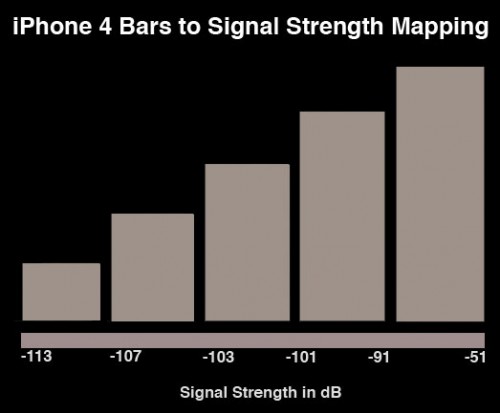 Apple has put up a letter telling what it thinks is the issue with the “Death Grip” issue and signal degradation. The bottom line? Apple says, in what it calls a surprising discovery, the software that calculates and displays signal bar strength on the screen is inaccurate. Apple is promising a fix for the iPhone 4, the iPhone 3Gs and the iPhone 3G since they say this has always been a problem. And I guess they are just now discovering it. Hmmm? Essentially, your display has been showing more bars than it should.

Upon investigation, we were stunned to find that the formula we use to calculate how many bars of signal strength to display is totally wrong. Our formula, in many instances, mistakenly displays 2 more bars than it should for a given signal strength. For example, we sometimes display 4 bars when we should be displaying as few as 2 bars. Users observing a drop of several bars when they grip their iPhone in a certain way are most likely in an area with very weak signal strength, but they don’t know it because we are erroneously displaying 4 or 5 bars. Their big drop in bars is because their high bars were never real in the first place.

To fix this, we are adopting AT&T’s recently recommended formula for calculating how many bars to display for a given signal strength. The real signal strength remains the same, but the iPhone’s bars will report it far more accurately, providing users a much better indication of the reception they will get in a given area. We are also making bars 1, 2 and 3 a bit taller so they will be easier to see.

As to the “Death Grip” signal degradation, Apple is saying that essentially if you’re in a weaker signal area, you’re probably going to see issues.Which jives with some of my testing and some good reporting here. (highly recommended reading on this by the way.)

The bottom line, is that if users follow through on the promised upgrade, they will see less signal strength reported on their phones. Which raises other interesting questions in my mind. Do other AT&T phones with other software report less bars in similar locations? And of course the timing is interesting of the letter’s release, coming on the Friday before a big three day weekend. Will be interesting to see how this continues to shake out.