The new iPhone, possibly called the iPhone 5 is still months away from release, but Apple is already preparing to snag the best domain name for the iPhone 5, iPhone5.com.

iPhone5.com is the home of a little used forum for discussion of the iPhone 5, but Apple wants the domain name for itself, filing a claim with the World Intellectual Property Organization, known as WIPO for short, to take over the domain name from the current owner. 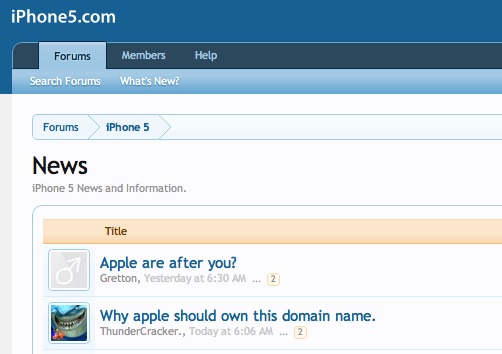 Fusible discovered the claim, tracking down the WIPO case number D2012-0951 which includes sparse details about Apple’s claims for the iPhone5.com domain name.

The purchase of iPhone5.com does not mean that Apple is planning an iPhone 5 release date in June as some have suggested, and it doesn’t mean that the next iPhone will be called the iPhone 5.

Apple has purchased domain names before to protect their trademarks without launching products with those names, if only to prevent the current owner from selling ads or placing pornography on the site.

To see all the domain names Apple has procured through the WIPO process, check out this page of Apple domain takeovers.