Apple was recently awarded a patent for hydrogen fuel technology on mobile devices. Thought the patent award gives Apple an early advantage and lead in the space, it’s unclear when and if this technology will make it into smaller mobile devices from Apple or other manufacturers, including the company’s MacBook Air and Pro line of notebooks, the iPad tablet, and iPhone smartphone.

Hydrogen fuel technology essentially combines hydrogen and oxygen to convert them into heat and electricity, with the waste product being water. 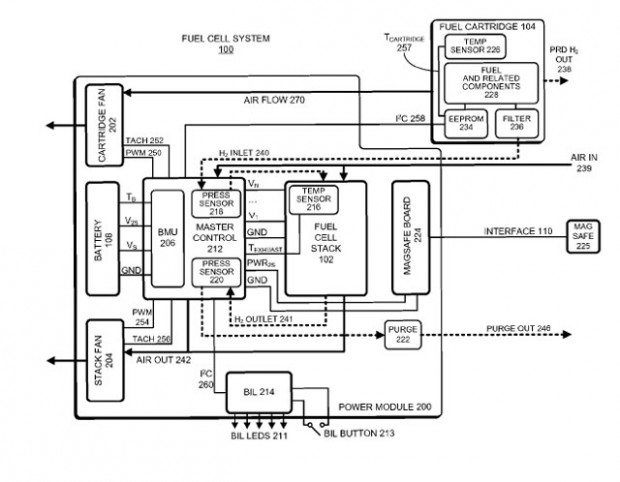 The greatest obstacle right now with this green tech is to create a small and stable system that generates enough power. In its patent application, it seems that Apple may have overcome some of these constraints as the now patented technology “eliminates the need for a bulky and heavy battery within the fuel cell system, which can significantly reduce the size, weight and cost of the fuel cell system.”

In recent years, Apple has played up its eco-friendly product features, and adding hydrogen fuel to the mix may help Apple promote itself even further to environmentally conscious users. The company highlighted the glass and metal parts in its products as being highly recyclable, durable long battery life with numerous discharge cycles as being beneficial to the environment, and compact packaging as reducing carbon emissions when transporting products.