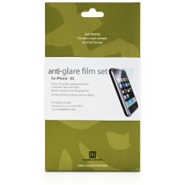 According to an iLounge report, Apple is getting rid of protective screen films from its retail and online stores. There’s no clear reason why Apple’s doing this. Film protectors are some of the most popular accessories at the Apple store, and something that Apple’s own retail reps always seem to push.
According to one company that sells protective films:

Apple has said that it will remove both film-only solutions from its stores, as well as any case or other accessory that includes film protection as part of its package, such as cases that include film screen protectors. According to sources, the ban will impact all forms of screen film, including completely clear film, anti-glare film, and mirrored film, regardless of whether the purpose of the film is protective, decorative, or both. It will also prevent sales of film for iPods, iPhones, iPads, and Mac computers.

That’s right, not only is Apple banning the relatively affordable plastic sheets that you can slap on your iPod’s or iPhone’s display, the company’s also getting rid of any case that incorporates screen protection.

I’m guessing that many manufacturers will continue to produce these products and sell them outside of Apple stores, but this move may hurt both the manufacturers and consumers. Despite Apple’s best efforts, any device with a clear display is prone to scratching over time, especially if it’s stored in a user’s pocket along with keys. Hopefully, Apple doesn’t issue marching orders to its salespeople to tell consumers that the protectors are no longer necessary.

Scratches and screen damage are not covered by Apple’s warranty and if you plan on keeping an iPhone scratch-free for two years I highly recommend buying some protection. Starting in may you’ll have to look further than the Apple store.