These Apple Black Friday deals will include deals on the iPod Touch, iPod Nano, iPad, MacBook Air, MacBook Pro and other items including accessories.

You won’t see any Black Friday iPhone 4S deals online or in your local Apple Stores.

The in store Apple Black Friday deals start at 7 AM on Black Friday, and online deals will likely start earlier, perhaps as early as midnight Pacific time (3AM Eastern) on November 25th. 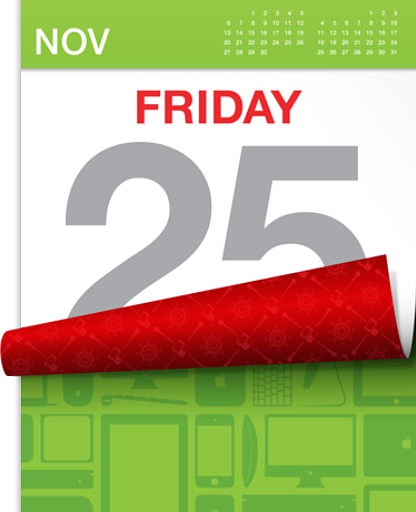 We expect to see similar Apple Black Friday 2011 deals as last year, which means you can see the following discounts.

Most of these won’t come close to the deals on MacBook Airs and MacBook Pros at third-party retailers, where gift cards are often added to give you a better deal. Best Buy has also already chopped $200 off the MacBook Air 13″.

Apple may have the most stock of Black Friday iPads, iPods and Macs, but they will also have the biggest crowds and they don’t have the lowest prices.

Check out our 9 tips to shop like a Black Friday Pro before you go wait in line for Black Friday at Apple Stores. You can also see the Black Friday guides for popular products below.