Visitors to Apple.com are being greeted with error messages just a couple of hours ahead of the iPhone 6s pre-order kickoff. The new iPhone 6s and iPhone 6s Plus are slated to go on sale in the United States at midnight Pacific time. However, those hoping to gather last-minute information about the new iPhones are unable to do so.

Apple typically puts its online store in a holding pattern just before major products go on sale. Visitors will typically be greeted by a graphic or countdown timer. As of 9:25 PM PST, Apple.com is inaccessible and visitors simply see the below message. 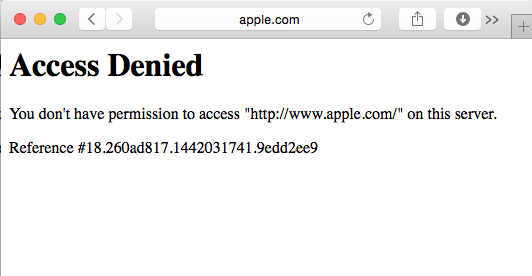 The above screenshot was taken on a Mac running Safari. We confirmed the error on Chrome, Firefox and Safari on several machines. Access Denied errors typically mean that the Web page is active, but access is limited to select audiences, such as users that are within a corporate network.

Read: How to Buy the AT&T iPhone 6s or iPhone 6s Plus

While the error and lack of iPhone 6s pre-order information may be frustrating, Apple is certainly aware of the issue and we hope all is back in order by the stroke of midnight. Apple.com is typically overrun each year when new iPhones first become available for pre-order.

The iPhone 6s and iPhone 6s Plus are Apple’s latest smartphones and look identical to the iPhone 6 and iPhone 6 Plus, save for a new Rose Gold finish. The newer phones have upgraded cameras, faster processors and a new feature called 3D Touch that makes it possible for the displays to detect how hard users tap, swipe and pinch.

This is the first iPhone 6s promo video Apple’s released. We expect to see many more in the coming days from Apple and its wireless and retail partners. The iPhone 6s will start at $649 and the iPhone 6s Plus will start at $749 before any carrier subsidies, which are increasingly rare. For the first time, Apple will sell its new iPhones on a payment plan called the Apple iPhone Upgrade Plan. The new upgrade plans allow iPhone fans to trade in the iPhone 6s in a year for the iPhone 7.