On the heels of Tim Cook’s apology to iPhone and iPad owners about the condition of Apple’s new Maps application, Apple has launched a new alternative “Map Apps” section in the App Store where iPhone, iPad and iPod touch owners can find Maps alternatives to Apple’s native application.

Earlier today, Apple’s CEO Tim Cook commented on Apple’s new Maps application, which has been the source of frustration amongst iDevice owners, saying that it fell short of the company’s standards and that he was “extremely sorry” for the frustration that the app has caused amongst owners of the company’s mobile device. 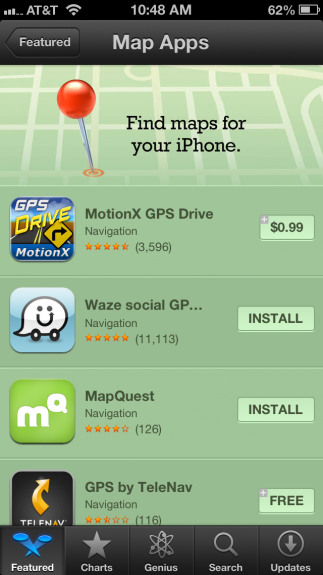 Apple has launched an alternative Map App section in the App Store.

On the front page of the App Store, there is a new option that beckons iDevice owners to “Find maps for your iPhone.” Once clicked, it takes users to a new screen where a new Map Apps section is house.

In that section, alternatives like MapQuest, Waze, Garmin, Magellan’s RoadMate USA  and more are all available to download as alternatives to the native Maps application.

This, along with Cook’s own admissions, points to the fact that Apple knows its Maps application is flawed and that it has a lot of work to do to get customers to believe in the app once again.

The inclusion of a new Map Apps section is a little bit odd considering what Cook said earlier. In his apology, Cook states that “the more our customers use our Maps the better it will get” but by offering this section and recommending alternatives, Apple seems to be pushing device owners away from the native Maps app at a time when it needs customer support.

Read: How to Report Issues with iOS 6 Maps.

iPhone and iPad owners are able to report bugs in the Maps application from the Maps app itself. And while Apple has not said how it is handling those complaints, we imagine it’s fixing as many of the bugs as it can.

And without the support of its users, the process may be a much slower one.