With the release of the iPhone 5, the new flagship smartphone will take over the current iPhone 4S pricing. That means that the iPhone 4S will now be dropped to just $99 on a two-year contract via Sprint, Verizon, and AT&T. The iPhone 4S will only be available in 16 GB capacity at that price point.

The iPhone 3GS is now dropped from the lineup and Apple will place the iPhone 4 in its stead. That means that the iPhone 4 will be available for free with a two-year contract in the U.S. in 8 GB flavor. 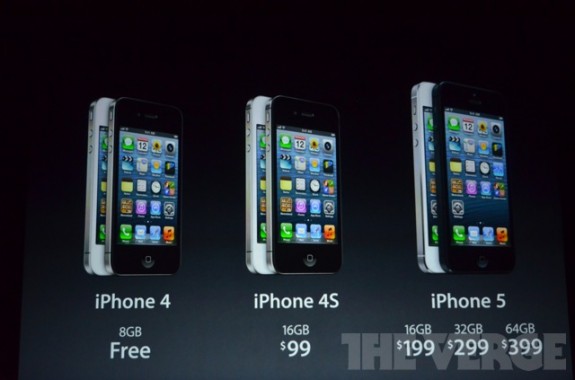 The pricing of Apple’s adjusted older phone models matches the company’s strategy in the past. When Apple had debuted the iPhone 4S a year ago, it had dropped the iPhone 4 and the iPhone 3GS prices down to attract a more entry-level market that may not need all the latest specs of the flagship phone.

The free price for an iPhone 4 is an attractive option for users who are new to the smartphone space and want a capable device. This will definitely give Android a run for its money as the iPhone 4 is still a very capable phone for that money and new smartphone users may not need all the power features and customizability that Android affords; those features are more valuable for power-users anyhow.

In the past, the demoted iPhone 3GS was only available through U.S. carrier AT&T–neither Verizon nor Sprint offered the phone. This will place all carriers on a level playing field by being able to offer a free, entry-level iOS smartphone. Last year, Sprint and Verizon were both limited to the $99 iPhone 4 as their cheapest entries.