Google was reportedly caught off guard and surprised when Apple had announced its plans to stop using the Internet giant’s mapping service a year earlier than the contract was set to end. Instead, with iOS 6, Apple had unveiled a replacement Maps app that eschewed Google’s backend mapping service in favor of Apple’s home-grown service, which was developed out of a series of smaller acquisitions of location based service companies and a partnership with TomTom, the owner of TeleAtlas mapping service. As a result, Google did not have time to react to or respond to Apple’s decision. 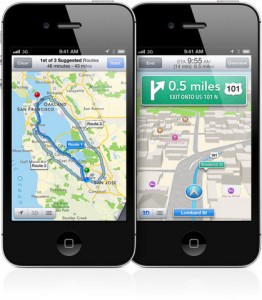 It had been previously rumored that Google was developing a third-party Google Maps app for Apple’s iOS App Store, but Google Chairman Eric Schmidt denied such rumors, stating that the company had not done anything yet.

Sources to The Verge report that a standalone edition of Google Maps will not be ready to ship for a few more months.

Since iOS 6 debuted, however, Apple had undergone a lot of criticism for its mapping service with users noticing inaccuracies and co-founder Steve Wozniak stating that Apple’s service is disappointing, but not as bad as what the media is making it out to be.

One speculated reason for why Apple decided to ditch Google is because the Android version of Google Maps, developed natively by Google, comes with voice-guided turn-by-turn driving instructions and offered more robust features than the iOS version. In the iOS version, Apple developed the front-end and Google provides the service and the back-end support. When the original iPhone debuted with integrated mapping service from Google, it was heralded as one of the best experiences at that time, but since then Google has launched Android and made the Google Maps experience on its platform more robust.