Last Friday we reported on an issue with the display panels for the new iPad mini with Retina Display that was showing up in some models. The issue involved screen image retention or screen ghosting or burn-in. I reported that I could see the screen image ghosting on my iPad mini with Retina Display. We pointed you to a test by Marco Arment that would allow you to examine your own device to see if you have the issue. In that post I reported that I couldn’t get a satisfactory picture to show you, but thanks to the quirks of how daylight plays in my apartment I can today present a picture that shows the test results with a distinct “ghosting” on the screen. 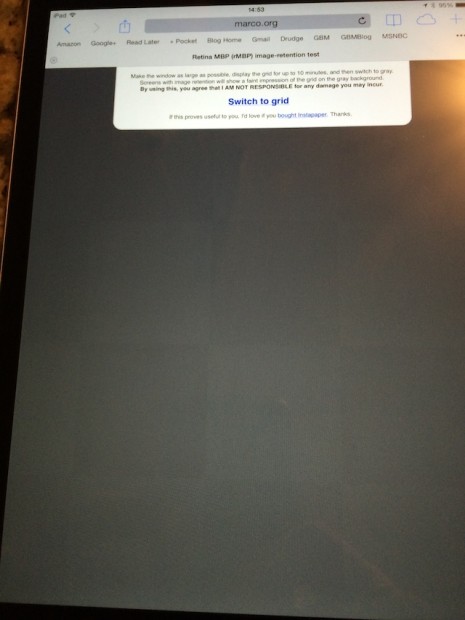 In the image above you can see the faint checkerboard pattern from running the test.

Needless to say I returned the unit today. With supplies of iPad mini with Retina Displays tight, especially the LTE models, luck was on my side and I was able to do a swap for a new unit. This new unit has passed the test with no issues.

Other members of the GBM team have been receiving their iPad mini with Retina Displays via shipping yesterday and today. Of the five of us who have received one, the first unit I had was the only one experiencing the issue. As stated, the new unit is fine, so that makes 4 out of 6 that are OK. That almost lines up with a poll that iMore.com is running about who is seeing the issue. Currently the poll says that 27% of the respondents have screen ghosting. It would not be fair to draw the conclusion that approximately 25% of the units have this issue from that kind of random, non-scientific sampling. It would be fair to say there is an issue and it might be worth you running the test that Marco Arment created. From my experience, if you run the test, which takes 10 minutes, the results will tell you immediately if you have screen image retention. 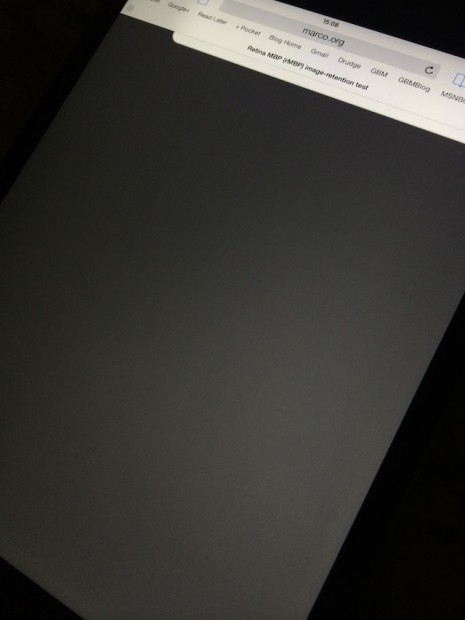 2nd iPad mini with Retina Display with no ghosting

In the image above you can see the second unit has no “ghosting.”

Keep in mind, this is an situation where you might never see this issue in everyday use. The other side of that coin is that you’re paying good money for a device with a primary feature being a brand new Retina display. Some devices have been manufactured, shipped, and sold with lesser quality displays than others. The Apple Store I went to had no hesitation about exchanging the unit once I showed them pictures as you see with this post. I did not need to run the test in the store, though I was prepared to. (Fair warning here: Arment issues a disclaimer saying that if you run the test and damage your screen permanently, he will take no responsibility. If any GBM users run the test you’re on your own as well. GBM takes no responsibility.)

The randomness of the screen image retention issue is most likely related to Apple using multiple display panel manufacturers. Reports are that Samsung, LG, and Sharp are all making panels for this device. There is no way to know which iPad mini with Retina Display contains which panels from which manufacturers and we still don’t know which panels from which manufacturers are causing the issue. Retail stock of the iPad mini with Retina Display remains tight, although there are some reports of things getting better. One of the supply issues is reported to be issues with manufacturing display panels that meet standards.

It is not unusual that early shipments of new devices featuring new components experience these kind of issues. As an early adopter consumer you should be aware of what potential issues are out there in the early days and check to see if your gadget  is affected so that you can return or exchange your purchase within the initial return period if necessary. Manufacturers want you and others like you want you to have a good experience and in most cases actually appreciate you returning defective merchandise so problems can be corrected down the road.

A couple of things to keep in mind when exchanging a device. First, Apple doesn’t necessarily swap your old device with a brand new device. Apple’s policy states exchanges can be refurbished units. Second, the best way to do this at an Apple Store location is to make a genius appointment. Have your facts lined up before hand and present your case in a polite and straightforward manner to achieve the best results. These folks are busy and will remain so as the holiday season heats up. Remember you’re not the only one with an issue who needs help. While waiting for my appointment I watched a one Apple genius at what can only be described as a triage table work simultaneously with three customers. Each of which received a satisfactory resolution of their particular issues.