Today Apple announced that 75 percent of its corporate facilities across the globe no rely on renewable energy for power instead of fossil fuels, up from 35 percent in 2010.

In the company’s Environmental Footprint Report for fiscal 2012, Apple revealed that a number of its facilities operate entirely on renewable energies. Apple’ corporate headquarters in Cupertino as well as offices in Austin, Texas; Munich, Germany; Cork, Ireland; Elk Grove, Calif. and Australia all operate entirely on renewable energies such as solar, geothermal and wind energy.

A number of Apple’s data centers including those in Prineville, Ore.; Newark, Calif. and the largest one in Maiden N.C. all run entirely on renewable energy as well. Apple even claims that it has the “the nation’s largest end user-owned, onsite solar array” just outside its Maiden data center. 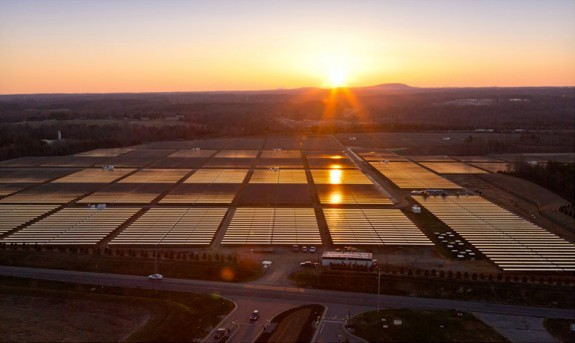 Those data centers store iCloud information and deliver apps, songs, movies and TV shows to users. So users who use Apple’s cloud services, buy a lot of apps or just buy media through iTunes can rest assured that Apple won’t produce any greenhouse gases just to deliver that content to iPhones, iPads, Macs and PCs.

Apple will also use solar arrays and geothermal energy to power the new data center in Reno, Nev. That data center will take full advantage of the sunny, warm environment of its Nevada home to avoid using power from power plants that use coal of other fossil fuels.

In addition to switching to renewable energy sources, Apple cut energy use by a total of 30 percent even while it increased its “occupancy” by 12 percent.

Apple’s commitment to “going green” and protecting the environment also extends to the materials in its products. Apple uses recyclable products like arsenic-free glass, aluminum and polycarbonate in all of its iOS and Mac products. The company also has a recycling program to help users recycle their old machine when they buy new ones.

Apple’s website also claims that many of its devices including the 11-inch MacBook Air, iPad mini, Apple TV and iPhone 5 all produce less CO2 emissions per hour of use than a 13-Watt CFL lightbulb.