Those looking for an iPad mini* pre-order tomorrow through AT&T, Sprint or Verizon won’t find one as Apple will be handling all iPad mini pre-orders and presumably, all iPad fourth-generation pre-orders as well.

AT&T told us that it has nothing to announce right now while we haven’t heard back from Verizon. 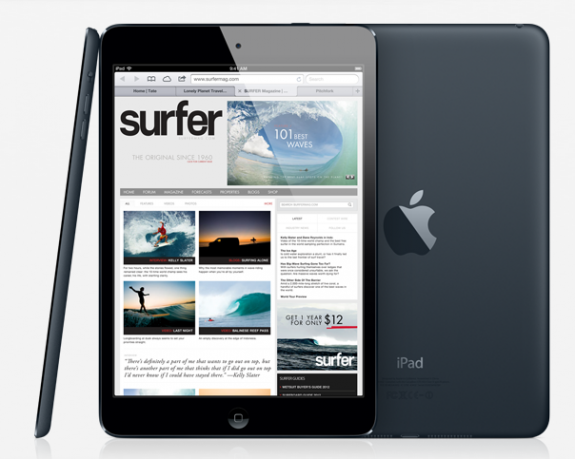 The iPad mini will go up for pre-order tonight, at Apple only, it seems.

Given that neither the iPad mini nor the iPad fourth-generation have shown up in any capacity on the websites of these carriers, and with the pre-order scheduled for tomorrow, it’s looking like AT&T and Verizon will follow Sprint’s lead.

Here is what Sprint had to say about the iPad mini pre-order:

Apple is handling all pre-orders for this device – Wi-Fi and Wi-Fi and cellular.

So, it would seem that the pre-order which begins tomorrow will only be available through Apple’s website. Sprint did not inform us about whether the devices would show up inside its retail stores, though with the third-generation iPad, both AT&T and Verizon started selling it on its release day.

Apple has yet to disclose when pre-orders for the iPad mini and iPad fourth-generation will start though we imagine that they could begin at midnight tonight if the company follows its usual methods. The iPhone 5 went up for pre-order at midnight in September.

The third-generation iPad went up for pre-order at RadioShack, though the retailer remains mum about an iPad mini pre-order. That could mean that the sole place to buy the new tablets between now and November 2nd will be Apple’s store.

Furthermore, it looks like the only place that customers will be able to buy a 4G LTE iPad mini or iPad fourth-generation until mid-November will be through the Apple Store.

The 4G LTE models are set to go on sale a couple of weeks after the November 2nd release date for the Wi-Fi only models.

Earlier this week, Apple announced the 7.9-inch iPad mini which checks in with a $329 starting price tag alongside the new iPad fourth-generation which brings Sprint 4G LTE,  Lightning port, FaceTime HD camera and A6 processor to the table.