Listen to anyone involved in making music, specifically someone involved in engineering music, and they’ll tell you that iTunes has resulted in poor sounding music. Music files just can’t get the same fidelity as a CD or vinyl record. Well, Apple has taken a step to remedy this problem and introduced a platform called Mastered for iTunes.

To get technical, music is typically recorded using 24-bit samples at 96kHz (or even up to 192kHz now), a CD will then handle 16-bit 44.1kHz which is about 15 percent of the data of the original recording. Even an iTunes Plus song compressed to a 256kbps AAC will be one-fifth the size of the CD recording, or three percent of the data from a 192kHz recording. 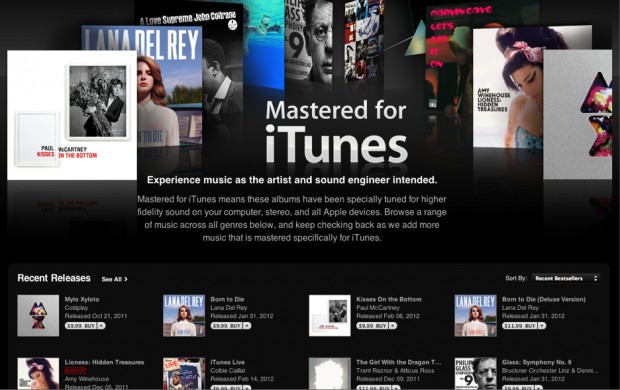 Because the AAC files compresses the song, it ends up not sounding the same way it would in a studio. Listeners using the bundled Apple earbuds, or cheap headphones in general won’t notice the difference, nor will they probably care too much.

However, there are users out there now with higher-end headphones that try to make the music sound better. Those users could be plugging in a pair of Beats, a mid-range pair of Sennheisers, or they could be plugging their iPhone into high-end audio systems. Those users need music that sounds better than the average compressed music file.

To answer this need Apple has put up a page on iTunes called Mastered for iTunes.

The albums on this page have been mastered to work around the limitations of the file format and the hardware the music is played on. Apple has given engineers guidelines and a toolkit to help make these albums sound better.

With the tools, engineers can check out how tracks will sound when a user buys them from iTunes. It’s extra work on the engineer’s part, but it’s important to the process to get the music to sound right.

Without the tools, songs will still sound “good” to most users, but won’t sound perfect. For example, Masterdisk Chief Engineer Andy VanDette has completely remastered all of Rush’s catalog to be Mastered for iTunes.

In an interview with Ars Technica he said that he “wanted to make sure the listener still heard the classic album come through, without it being too loud, boomy, or modern sounding.”

By making the albums Mastered for iTunes VanDette can make sure the albums sound just like they did 35 years ago when Rush started making music.

Of course to appreciate those sounds you’ll still want something better than a cheap pair of headphones. The tracks still probably won’t sound as good as a lossless file would sound, but you’d need to be an audiophile or a music engineer to hear the differences.

As devices start to get bigger storage capacities those lossless files, or just higher resolution AAC files could be a possibility.

For now it’d just be nice if more albums were added to the Mastered for iTunes page. It’s about time the music industry started mastering music to sound as close to studio-quality as possible on when played through a smartphone or iPod.