Code found within the iOS 5.1 beta seeded to developers reveal that Apple is prepping a successor to the compact Apple TV box. The new Apple TV referenced, which is still believed to be a companion set-top box accessory rather than a full-fledged Apple-branded HDTV, is given the code name of J33.

Little is known about what the upgrades for Apple TV are, but Apple may be upgrading the box to a dual-core chipset to allow 1080p HD video playback. Siri support may also be a feature that would make Apple TV a fun upgrade for some as it may reduce the device’s dependency on a physical remote control in favor of voice commands for searching for content and playback. 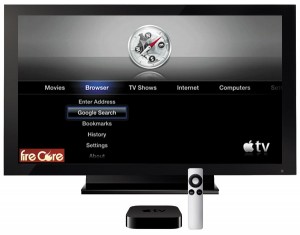 As Apple’s competitors have begun to lower their set-top box pricing, Apple TV may come out with additional features to justify its $99 pricing or the device will see some reductions in price to stay competitive. Roku, for example, is now selling its boxes at a starting price of just $50, or half the cost of Apple TV.